Your Guide to Bougainville

Bougainville Reef is named after Louis-Antoine de Bougainville who could so very easily have claimed Australia for France. Had he not turned north-east to avoid the perilous breakers over this reef, he may have 'discovered' Australia 2 years before Captain Cook. Imagine how different Australia could have been if colonised by the French! The reef which bears his name lies some 150 km to the south of Osprey Reef and is not often visited by Australian liveaboards in this area. Normally, Coral Sea trips will return to the Ribbon Reefs after visiting Osprey Reef but if conditions permit, you may be lucky enough to dive around this exposed offshore reef. 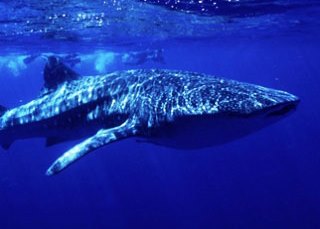 Like Osprey, Bougainville is a Coral Sea reef in the middle of nowhere that enjoys a proliferation of life thanks to the deep ocean upwellings that bring nutrients into the shallows. The coral here is in great condition. Superb visibility and a lack of river run-off result in pristine reefs with some large areas of the finest plate coral imaginable.

Dives here typically consist of quite steep walls from about 15 to 40 metres followed by a slope to greater depths. There are the same type of healthy hard corals you might see at Osprey Reef and also plenty of schools of fish. Bumphead parrotfish in schools of up to 50 regularly charge around munching the coral into a fine sand. Yellow-tailed barracuda and jacks are also present in impressive numbers.

Smaller fish also school in numbers unlikely to be seen elsewhere, and the reef edge is often dancing with hundreds of fish such as pyramid butterflyfish, unicornfish and blue dash fusiliers, all in impressive numbers. Sharks, rays, tuna and turtles are all commonly sighted here too.

The crew on board your Coral Sea liveaboard are probably going to be excited to be going here. Not only is it a seldom visited spot, but they also know that it offers some of the most unspoilt scuba diving in Australia. So you too should be thrilled if you have the good fortune of hearing the captain announce that they are setting sail for Bougainville.

The Zoo - This is one of the most-loved spots in Bougainville, whose proliferation of creatures gives this site its name. You can expect plenty of white tip reef sharks as well as some cowtail rays on the sea floor, grey reef sharks in the blue, as well as green and hawksbill turtles, plus myriad schooling butterflyfish and unicornfish.

The Sticks and Between the Wrecks - These both offer some wonderful drift diving opportunities with exceptional visibility and the chance to see large numbers of the creatures that visit or call Bougainville home: sharks, rays and schooling fish in abundance.

The Antonio Tarabocchia is the wreck of an Italian cargo ship that sank here in 1961 after striking the reef on a dark and rainy night buffetted by strong south-easterly winds. Its remains are not exactly pristine, but have succumbed to the constant forces of nature and now lie scattered over the sea floor.

Other dive sites that you may visit here include Crystal Plateau, Dungeons & Dragons, Middle Earth, Southern Wall and Silver Slope.


How to Dive Bougainville


Due to its remoteness, access to the Bougainville is by Great Barrier Reef liveaboard only. It is only visited by those Liveaboards that take in Osprey Reef but it does not form part of the normal route. For more information on the cruises, duration options, and all the other travel information you might need to enter Australia, visit our Coral Sea liveaboard section.

Depending on weather conditions, your captain may decide to spend a shorter time at Osprey in order to visit Bougainville, so it is unlikely it can be promised in advance.

Liveaboard diving cruises to Bougainville and Osprey Reef are in high demand and fill up quickly. We recommend you plan to book well in advance.

Where is Bougainville and How Do I Get There?

As with all Osprey Reef liveaboards, some operators do also leave from or return to Lizard Island, which is accessible by flight. The flight departs from Cairns and flies to Lizard Island over the reef, providing you a scenic trip with an overview of what you'll be diving on the Great Barrier Reef. This promises to deliver some of your best Australian scuba diving memories.