Your Guide to Diving in Sangalaki Newsletter

In 2003 my aimless Southeast Asian wanderings had brought me as far as Bali. What had previously been a journey of minority villages and contemplation of the horrors of war had, as I had progressed south, become a bit of a diving tour. Here I was, in the most bio-diverse underwater region in the world, free from the constraints of gainful employment and with a few sterling notes in the bank. How could I not check out at least some of the aquatic highlights of the Indo-Australasian archipelago?

So it was that I came to be on a liveaboard cruise to Komodo. This in itself was excellent, but that is another story. However, one dive during the trip was to set me on my course for Sangalaki. Just off the south of Rinca, I found myself rolling with the swell towards the end of a dive spent hunting in vain for mantas. Then it happened. A shape appeared before me growing ever bigger and clearer. A majestic manta ray headed straight in my direction as I hovered awestruck at about 6 metres. This graceful, beautiful fish seemed to notice me late and, in an incredibly agile manoeuvre, flapped itself around and swooped off from whence it came. 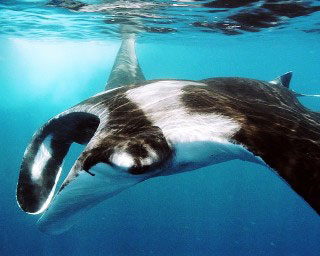 It was love at first sight. In the way you do when you meet someone who really flicks your switch, I immediately resolved to make it my business to have more such encounters. So the research began; I asked around and the sound of the name that kept being mentioned grew too loud to ignore ... diving in Sangalaki.

I arrived on this little tropical island not knowing really what to expect. By this stage in my diving career I knew enough to not bank on diving operators' exaggerations- they all claim to be fabulous! In truth I would have been happy with a manta sighting or two on each "Manta dive". However, like the diving equivalent of Pulp Fiction, Sangalaki is one place where sometimes you really can believe the hype. We decided to start the first dive when we could see around 8 or 9 manta rays at the surface around the dive boat - enough said.

If I was awestruck by my first manta sighting in Komodo National Park then you can imagine the reaction to the sensation of being surrounded on all sides: in front, behind, on either side, above and below by playful, soaring and twisting manta rays ... I swear I heard violins. By dinnertime of my first night I couldn't be certain how many individual mantas I had seen and it is even difficult to divide them into sightings since many of them never leave one's field of vision. Suffice it to say I was completely ecstatic at my first day's return.

Sound too good to be true? It isn't. Read more about the amazing scuba diving in Sangalaki here:

As if this wasn't enough there were more incredible surprises in store. Firstly was the unforgettable experience of snorkeling in the jellyfish lake of nearby Kakaban. We have all seen prize-winning photographs of beautiful women with firm bodies swimming in the jellyfish lake in Palau, yet here I was, slightly less firm but no less beautiful, swimming in a soup of sting-less jellyfish of various sizes and hues - completely bizarre.

Kakaban's exterior also boasts colourful and abundant walls not unlike Sipadan, and Sangalaki has excellent critter and night diving but even these are not the third of Sangalaki's 'Big 3'. The third unforgettable memory I have taken with me from my visit, concerns the bosses of the island. The true owners - the turtles.

All human dwellings on Sangalaki are built on stilts to allow our gracious hosts to find suitable sites for egg-laying. This I found an interesting aside until the afternoon before my departure, when a great commotion caught my interest. I wandered over to see why everyone was staring down at the sand but I couldn't see what it was they were looking at. Then suddenly there was a movement. A little sand shifted. Then a little more. Huh? What's that? Then a dark grey little piece of something or other emerged, followed by the rest of the most adorable baby turtle. Then another appeared ... and more ... and more still. They began instinctively heading for the sea, but were collected for later release after sunset to allow them a better chance in the game of life.

We released them at twilight and off they scurried and swam into an uncertain future. A few met a premature end in the talons of the resident sea eagles and doubtless many more were gobbled up before they got too far but some will make it and maybe return here one day to lay their own eggs, continuing the circle of life and adding to the pleasure of Sangalaki scuba diving.

My life too had to move on and so it was with treasured memories that I said farewell to the island and to the staff at Sangalaki Dive Lodge, the only people on the island. Amazing, I thought. Amazing diving and communions with nature. Amazing memories. Amazing that not more people know about this destination which has it all in such abundance.

So, why don't they? Well it hasn't been running that long for a start. Furthermore many are put off by the thought that it is too difficult to get to. Well it is a hop, skip and a jump from Singapore, Kuala Lumpur or Kota Kinabalu, but not much more effort to get to than Sipadan, which sees plenty of visitors. Considering the astonishing rewards I would suggest the effort to get there is eminently worth making, since the pictures taken with your camera or in your mind's eye will live forever.

... Everyone was very friendly and helpful. Before we arrived our emails were answered very promptly and professionally ... -- Chantelle Rule, Australia.  [More customer reviews]