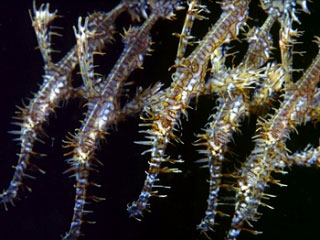 Sightings of a pipefish during a dive are rare indeed as these fish are well camouflaged within their natural environment. These colourful and delicate fish resemble a straight-bodied seahorse and belong to the same family. The name 'pipefish' is derived from the peculiar shape of their snout.

Spotting one of these fish is a difficult task as most of them are only about the size of your little finger, however they can grow up to 15 cm long.

Their shape and colour mean that they easily blend in with their coral habitat usually living on feather-stars, crinoids and gorgonian fans. All of the family members possess vivid colours, unusual markings and an elongated body shape, but the Harlequin Ghost Pipefish is one of the most attractive. Any sighting by a diver is an experience of awe and wonder.

The ornate ghost pipefish has an unusual snout which is similar to a long tube and ends with a tiny mouth. The mouth opens upwards and doesn't possess any teeth. The body and tail are elongated and thin. They also have a highly modified skeleton made up of plating. This dermal skeleton has several longitudinal ridges which make the body of the fish look angular instead of oval like most other fishes.

Harlequin ghost pipefish use their mouths and their long snout to suck up tiny crustaceans and feed mostly on mysids and benthic shrimp.

These creatures tend to spend a lot of time in relatively small areas. This is due to the fact that although they navigate and can position themselves with precision, they are poor swimmers. This can be an advantage to the diver as once the fish's location has been found, it can easily be observed again when re-visiting the same dive site.

They hang motionless upside down with their mouth pointed downwards, usually amongst the branches of coral trees or featherstars. They are often found in pairs or small groups. During the breeding season they tend to be well hidden and are capable of changing their shape as well as their colour for more effective camouflage.

Unlike other members of this family, the female ornate ghost pipefish does most of the parenting. Her pelvic fins are larger and connect both to her body and to each other so that a brood pouch is formed. It is here where the female carries her eggs. This protects the young as they develop and allows the female to choose a suitable location for their best chances at survival. She may have as many as 350 young at a time.

The young are born free-swimming and begin feeding immediately. From the time they hatch they are independent of their parents.

The juvenile begins its life drifting on the ocean currents. What is interesting is that at this stage the fish is virtually transparent. It only takes on colour and shape when it reaches maturity and settles on the coral reef to reproduce. Colour and form are taken on for camouflage to protect it from predators.

Courtship between the male and female can be elaborate and last for many days. The female then carries her fertilised eggs in her brooding pouch until they are 'born' when they are set adrift and the cycle restarts.

Unfortunately the beauty and uniqueness of the Harlequin ghost pipefish means it has become an attractive acquisition in the aquarium and this trade has depleted their numbers in the wild.

As well as this, pollution and destructive fishing methods have both impacted on the health of their habitats with negative consequences, as has coral bleaching.

Ornate ghost pipefish can be found throughout the tropical waters of the Indo-Pacific region from the Red Sea and all of the Indian Ocean including the Maldives, across to the central Pacific. They tend to inhabit reefs or seaweed beds in shallow water but may be found as deep as 30 metres.

The Thailand dive site where they are most likely to be seen is Richelieu Rock. They can also be observed in Myanmar's Mergui Archipelago, Indonesia and Malaysia. They are also found off the east coast of Africa and the east coast of Australia.