Schools of shimmering trevallies frequent reefs, beaches and lagoons throughout the Indo-Pacific and central Pacific regions. They are sure to surprise and delight you with their appearances in large numbers and lightning-speed hunting action. 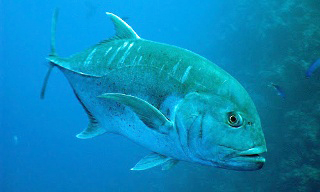 Trevallies are either schooling or solitary and are part of the large, extended jack family that includes a number of species. They include giant, silver, gold-spotted, banded, blue, thicklip, black, bluefin, bigeye, golden, sand and diamond trevally.

As a group, trevallies are relatively easy to recognise as being cousins, however distinguishing between the different sub-species can sometimes be a little trickier. Silver trevallies are 35-50 cm long and weigh 0.4-2.5 kg. They have a blueish silver upper body, yellowish silver sides and a silver belly. Possibly, the easiest way to identify the silver trevally is by their small black blotch on the operculum (the hard bony flap covering the gills).

The largest of the genus Caranx is the giant trevally. They are silver in colour with some dark spots. The most distinguishing feature is their steep head profile and size. Some individuals grow to a sizeable 170 cm in length with a weight of 80 kg!

As one would expect with such an extended family, the different sub-species have varying behaviours. This makes for interesting observations when diving with trevallies.

As a group they are formidable predatory fishes. Nature has gifted them with superior swimming abilities and power that they use when hunting. Trevallies hunt in schools or individually, as is the case for giant trevallies. Trevallies are known to use a variety of hunting techniques, including aggressive attacks, reef ambushes and scavenging on chunks in the wake of larger predators. The diversity of this species extends to their hunting time; these include being nocturnal, diurnal and crepuscular. The most unique hunting technique belongs to the golden trevally: having no teeth and fleshy mouths, they use their highly protractile jaws to suck out prey (including crustaceans, molluscs and a variety of fish) from the sand or reef crevices.

Trevallies are apex predators and have few natural enemies. They are only threatened by some tropical shark species, seals and of course by humans. Trevallies are mainly targeted for recreational fishing in western countries. In particular giant trevally numbers have declined, possibly due to sport fishing. 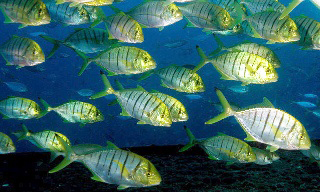 Trevally spawning occurs during the warmer months. Due to their vast distribution across our oceans, spawning therefore occurs at different times of the year dependent on the location.

Irrespective of the location or month, trevally spawning correlates with specific stages of the lunar cycle during a 4-month period. At sexual maturity (30-50 cm) trevallies are serial spawners, with multiple batches of eggs being released over the spawning period. (Females produce 50,000-200,000 eggs per season!).

Mature individuals travel long distances to breed in large spawning aggregations. They gather around offshore reefs, meeting in vast schools near the sea floor. Schools may swell to up to more than 1,000 fish. During this period the male’s coloration deepens to a darker hue. Approximately 4 would-be male suitors chase a single female until the victorious male sinks to the ocean floor with the female where the eggs and sperm are released. The fertilised eggs are left to their pelagic destiny.

Trevally eggs hatch after approximately 28 hours into very small larvae. They drift in the sea as they grow. When they are merely 7-14 mm long, trevally larvae can swim against a current and feed on zooplankton. Some species avoid reefs and live pelagically, using jellyfish and other floating objects as protection and others are known to prefer estuarine conditions. The survivors have a fast growth rate and a relatively long life span, living up to 30-40 years depending on the species.

Trevallies are widely distributed across our oceans and reside in a variety of habitats. Species are present in all aquatic settings, including shallow reefs, bays, harbours, coral and rocky reefs, lagoons, sand flats, seagrass meadows and estuaries. They are found as shallow as 2m and up to depths beyond recreational diving limits.

Mature trevallies have few natural enemies. The main threats to their survival come from humans. These threats include recreational and to some extent commercial fishing, including by-catch. Climate change, water pollution and reef destruction are dangers to every aquatic species, including the trevallies.

... All correspondence was timely, clear, friendly, informative and accurate. For this many thanks ... -- Ben Davies, Singapore.  [More customer reviews]