Palau on the Frontline

Palau is a remote island nation in the Pacific Ocean, east of the Philippines and north of West Papua in Indonesia. It is one of the world's smallest countries with only around 20,000 citizens scattered over the 250 or so islands that make up this idyllic tropical archipelago. 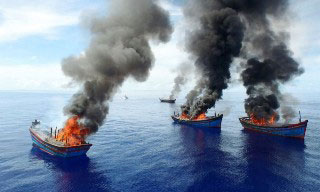 It has been in the news in recent years for bold and pioneering initiatives to preserve and protect its marine habitat, particularly by banning all commercial fishing around its waters. Current president Tommy Remengesau recently put it simply by saying, "We are not anti-fishing, we are pro-fishing sustainably". This of course is good news, not only to the fish but to visiting scuba divers too.

How is it that this tiny, lowly populated and relatively powerless country should be leading the way? Why is Palau blazing a trail for the protection of marine ecosystems that exposes the inertia of other supposedly more developed nations?

1900s - Marine protected areas (MPAs) have been established in pockets around the nation for many years, such as no-entry zones like the Ngerukewid Island Preserve (1956) and no-take zones like the Ngerumekaol Spawning Area (1976). For decades Palau has been aware of the need to protect and preserve specific areas for specific purposes.

By the turn of the millennium there were over a dozen conservation areas, in addition to areas assigned protected status such as 'wildlife preserves', 'sardine sanctuary spawning areas' and 'marine managed areas'. While these saw some localised success, such an adhoc system of protection was not necessarily effective for nation-wide biodiversity and provided inadequate resilience to the impacts of climate change.

2003 - The Protected Areas Network Act was signed into law to establish a nationwide approach and to assess how the distinct MPAs could function in an inter-connected fashion.

2009 - President Johnson Toribiong declared the first official sanctuary for its 135 species of sharks and rays considered endangered or vulnerable. This forbade all forms of commercial shark fishing within Palau's 'extended economic zone', an area equivalent to the size of France. Alongside this step came the ban on bottom trawling, a fishing practice that causes devastating and indiscriminate damage to everything in the net's path.

2014 - 5 nations including Palau pledge to extend marine protections to cover more than a million square miles. The new Palau National Marine Sanctuary consists of some 500,000 square kilometres where industrial-scale fishing and exports of catches are banned.

2015 - Palau hits the news with images of burning Vietnamese fishing boats caught poaching marine life from their protected zones. "We wanted to send a very strong message. We will not tolerate any more of these pirates who come and steal our resources", President Remengesau said. 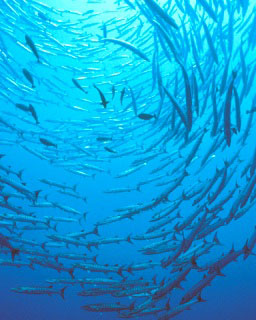 Palau lies around the north-east of the renowned Coral Triangle, close to both the Philippines and West Papua in Indonesia. It is little surprise that it boasts impressive marine bio-diversity statistics. There are said to be in excess of 400 coral species in Palauan waters and some 1,400 fish species. Palau is also home to some less-than-common marine inhabitants, including the 'stingless' jellyfish of its marine lakes, dugongs and saltwater crocodiles.

In recent years Palauans have seen negative impacts on their marine ecosystems caused by a number of contributory factors. Over-fishing, deleterious logging practices, the impacts of El Niño in 1998, increasing development, and rising numbers of tourists, altogether had put a visible strain on Palau's marine environment.

The coral bleaching that came with El Niño has led to increased study regarding coral resilience. The Nature Conservancy has implemented a system of design which allows protected areas to be connected by ocean currents allowing larvae from healthy and successful reefs to regenerate regions of coral damage.

Sharks also play a significant role in the marine ecosystem of Palau and are a major drawcard for divers from all over the world. Losing this creature from its waters would deal a significant blow to its tourism revenues.

Tuna may not be seen by scuba divers as frequently as sharks, but they are present in large numbers in deeper waters offshore. Palau's waters and those of 16 other Pacific island nations are where 60% of the world's tuna is harvested. Palau may only manage 5% of these waters but if tuna stocks have any chance of rebounding, more nations need to be able to take effective and enforceable measures to prevent over-fishing in this region.

National Geographic explorer-in-residence Sylvia Earle described the new 2014 reserves as "big steps in the right direction" and praised the realistic approach of Palau to "allow a small amount of fishing in small areas, and then protect the big areas". Marine scientist from the international non-profit organisation Oceana, Amanda Keledjian described the reserves as "very significant" in that they seek to "preserve biodiversity, large predators and reefs".

Since the establishment of the Protected Areas Network in 2003, visitors are required to pay a 'Green Fee' when leaving the country. This assists the Palau Conservation Society to achieve a sustainable funding source to assist their conservation efforts.

This success has inspired partners in Guam, the Federated States of Micronesia, the Marshall Islands and the Northern Mariana Islands to explore similar fees. 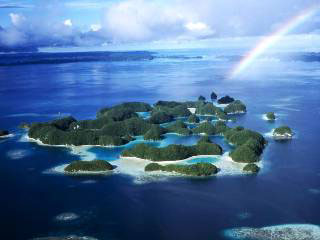 When you arrive at the airport in Palau, the walls are covered with images of sharks and details of the historic creation of its sanctuary. It is an achievement of which Palauans are justifiably proud. Their approach has always been a very practical and common-sense one. President at the time, Johnson Toribiong famously stated, "The need to save the ocean and save sharks far outweighs the need to enjoy bowls of soup".

Years later his successor Tommy Remengesau confirmed "It is working", adding "Studies have shown that a live shark is worth much, much more than a dead shark, and the same goes for all species". He has even been quoted as stating that, to Palau, a shark is worth US$ 1.9 million in tourism over its life span.

Since Palau established its shark sanctuary, Guam, the Marshall Islands and the Northern Mariana Islands have all followed suit. The Federated States of Micronesia recently passed legislations to establish its own sanctuary covering more than 3 million square miles, an area larger than the landmass of the USA.

Enforcement of no fishing zones

Enforcement is always the difficult issue when it comes to protecting large expanses of open sea. Palau's resources are not huge but they have been adding to their number of patrol ships and have tested the use of drones and other technology in helping to combat illegal fishing. The images of burning boats is proof that they are having some impact and are keen to make their intentions clear.

Neighbours Indonesia have also taken firm action recently, blowing up and sinking 41 foreign fishing vessels, as a warning against poaching in the country's seas. Interestingly, such dramatic punishment has been given the backing of the International Tribunal for the Law of the Sea. They ruled that such actions were not unlawful but necessary measures to prevent illegal, unreported or unregulated fishing operations.

It is no surprise that Palauans are proud of their nation's bold stance on marine conservation issues. Such island nations are in the frontline in the fight for conservation of marine habitats and species. One can only hope that they serve as an inspiration for other countries to adopt similar no-nonsense, effective approaches in an effort to preserve nature for future generations.

... Your services was great. You got back to me straight away and followed up on everything that I asked about. Will be in touch with Dive The World if I ever need any help with diving holidays again ... -- Victoria Plummer, UK.  [More customer reviews]