Setting the Scene for Invasion

In early 1944, during World War 2, American sea power was beginning to make inroads on the southern flank of Japan's Pacific frontier territories. The islands of the Pacific were of key strategic importance since they helped to facilitate the protection of the occupied regions of the Philippines, Indo-China, Malaya, Borneo and the Dutch East Indies. Protecting the islands had become an air battle the Japanese air force could not win against the superior might of the U.S. 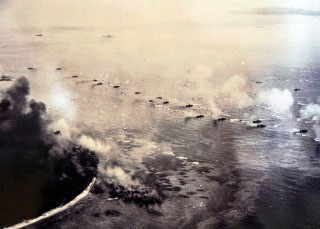 Once the Japanese airforce was eliminated and the US established air superiority over the islands of Palau, the large contingent of Japanese warships and merchant ships in the islands were in peril, vulnerable to strikes from above. Operation 'Desecrate One' was the name given to the series of airstrikes on the Japanese fleet who were bombarded with torpedoes, bombs, rockets and strafing attacks. Planes also dropped floating mines into key channels to prevent escape. Subsequent operations named 'Snapshot' and 'Stalemate II' followed, further decimating the fleet, prior to the amphibious landings in Peleliu, southern Palau in September 1944.

The air strikes were responsible for the destruction and sinking of more than 60 Japanese ships in Palau. Many Japanese planes met the same watery fate alongside a few US planes lost in aerial combat.

Not all of these wrecks remain today. In the years following the war, the Japanese government was given permission to conduct salvage operations as a way to raise money to pay war claims. At least 27 wrecks were partially or completely salvaged, much of the parts being sold for scrap metal. No-one, it seems, considered the alternative of leaving them intact to add to Palau's underwater attractions. Those that remained have become bedecked in hard and soft corals and encrusting sponges, acting as artificial reefs supporting the profusion of life that characterises Palau's rich marine environment.

With the growth of recreational scuba diving in Palau in the 1970s, the potential of Palau's wrecks became more apparent and with it the need to locate and identify as many sunken planes and boats, as possible. Led by the local pioneer dive company Fish 'n' Fins and local brothers Tewid and Tiakl Boisek, who had worked with the salvage teams, several more were located during the 1980s and 90s.

So what does this mean for the recreational diver on a Palau liveaboard? What sites and islands of significance might you visit during your cruise?

This army ship was attempting to leave in convoy via Palau's main channel leading to Toagel Mlungui Pass at first light on 30 March when US planes flying the 1st strikes and mining missions of Desecrate One hoved into view above the Teshio Maru. Although no direct hit was observed the boat was later seen beached on the east side of the shipping channel as a result either of torpedo damage or evasive action. Other US aircraft carried out 2 strafing runs on the listing vessel. 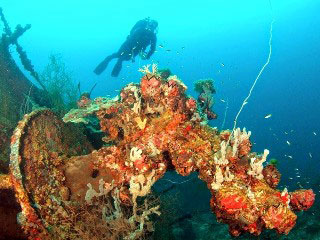 The crew managed to move the ship off the reef but after a short while it sank on its starboard side in the shipping channel. The gaping hole and twisted metal on the port side and bottom of the hull, which can clearly be seen when diving it, are consistent with a torpedo strike, most likely from one of the first raids of the day. The propeller and bronze navigational gear have been stripped.

The wreck is easily penetrated with large entry and exits points and sufficient light as to be diveable without artificial illumination. The most photogenic spot is the deck gun at the bow which remains easily distinguishable as such despite coverage by black coral, oysters and other marine growth.

The only confirmed strike on the Chuyo Maru was a 500 lb bomb dropped from a 100 foot altitude glide bombing attack at 09:32 on the morning of 31st March 1944, enough to cause this coastal freighter to sink on the evening of 1 April. Divers rediscovered the wreck in 1989 in the northwestern part of Malakal Harbour. The ship's identity is further supported by the finding of China on board bearing the logo of Toyo Kisen Kaisha, the ship's commercial owner.

This wreck sits upright on the 38m deep lagoon floor. It remains remarkably intact although visibility can sometimes be a challenge. The tall forward mast stands erect, a crow's nest has fallen from the upper part of the mast and now lies at its base net to a winch. There is evidence of extensive fire damage to the entire bridge superstructure. Soft coral, oysters and heavy black coral line the rails and decks.

An intact deck gun stands at the stern which once would have been used for anti-aircraft and anti-submarine defence. Large capacity shells were loaded by hand and fired at a rate of 8 rounds per minute with a maximum range of 5,300 metres. Oh, to muse how this instrument of death now supports life!

This unidentified cargo ship came as a surprise discovery to the scuba divers identifying the wrecks of Palau. Instead of an expected debris field, they found this 57m vessel largely intact and lying on a sandy slope at depths of 15 to 33m.

The dive usually begins at the stern at the circular gun platform which has depth charge launchers located on each side, their lethal charges still inside. A huge explosion ripped through the hull spilling the eponymous depth charges over the sea floor. There is a beautiful hard coral patch behind the stern consisting mostly of staghorn, brain and lettuce corals.

This is one of the most accessible sea planes to dive in Palau. This 1938 built Aichi Navy float plane which had a 3-man crew now rests among hard corals in 13 to 33m depth meaning it is visible from the surface. It seems to have crashed shortly after take-off. Unbent propellers suggest they were not turning at the time of impact with the water's surface.

Much of the inside of the plane has been stripped of artefacts although some dials and gauges remain. You can inspect the surrounding reef for cuttlefish, octopus and nudibranchs.

The Battle for Peleliu Island

The aerial missions of 1944 were intended to pave the way for amphibious landings. They began in September of that year most notably on the southern island of Peleliu. This strategic island and its airfield had been under Japanese control since WW1 and taking the island was a key priority for the US forces, since General MacArthur declared it crucial for the taking of the Philippines, which was to follow. As the first wave of men from the 1st marines battalion made their amphibious landings on Orange Beach, the battle was anticipated to take about 3 days. What followed was a month of gruelling combat with heavy casualties on both sides.

The Japanese had adapted the terrain on the island to their great advantage. Hills of ancient coral thrust high by violent volcanic activity had been hollowed out into an elaborate network of caves. This allowed for devastating vantage points, and a network for moving troops and storing weapons. There were also pillboxes, bomb shelters and heavily fortified buildings acting as arms stores located around the island.

An optional tour of Peleliu is likely to be available on your liveaboard cruise. It takes a couple of hours to visit the main sites on a minibus with a local guide. You will be shown the runways, rusting hulks of amphibious landing vehicles, an old Japanese tank, a museum full of artefacts and emotional stories, and some of the elevated positions in the hills of coral. 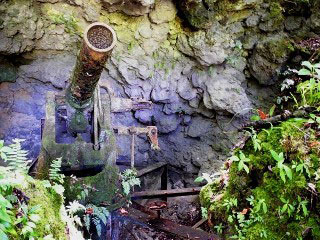 There have been several decades for vegetation to reclaim the land that was once cleared by machinery and napalm so it can be difficult to compare images of the 1940s with the lush, peaceful landscape of today. For example, US marines had to cross a large flat expanse of airfield on foot, under fire from on high with little or no cover. For many, the order meant certain death. Now tall lush trees and thick bushes separate the runways so it is hard to picture the sense of exposure felt during that desperate scramble across the flat terrain.

You may visit Orange Beach, where the first experience of Peleliu for many was to land on a beach and immediately come under intense enemy fire from the jungle interior. Heavy casualties were sustained on the beach landings, sometimes in bizarre and tragic circumstances. 1 amphibious vehicle reportedly struck a shallow reef some way from shore, forcing the marines inside to jump over the side and make their way to the beach walking over the shallow reef. 2 soldiers jumped into the water where the reef drops away into the abyss. Laden with heavy WWII uniforms and accessories they sank quickly into the dark depths.

Visiting the museum, there are many artefacts from both sides as well as newspaper stories regarding veterans meeting and exchanging possessions decades after the guns fell silent on Peleliu. Ultimately the battle for Peleliu was won by the U.S. although 6,526 marines lost their lives. The bodies found have been returned to Arlington cemetery. The Japanese who were said to be fearsome fighters who would rather die than be captured suffered losses of over 10,900 men. Only 19 were taken prisoner. MacArthur changed his mind and never used Peleliu as a base for liberating the Philippines.

Orange Beach is where many marines first tasted the horror of Peleliu. As the shores of the island were bombed relentlessly from air and sea, amphibious landing craft scrambled over the reefs and reached the beach in a chaotic hail of bullets and shells.

Below the waves, then as now, there was likely a vast pristine field of hard coral, healthy and perfect, unimpacted by the battle raging overhead. You can dive here on what is, even without the historical context, an interesting dive. Mint condition table corals, cabbage corals and boulder corals cover the gently sloping sea floor and are interspersed by occasional sandy channels, rocky swim-throughs and windows. Turtles amble lazily over the reef, shrimp-goby duos pepper the sand, while colourful reef fish such as butterflyfish and squarespot anthias flit this way and that.

Artefacts from 1944 remain strewn around the reef. Bullets, shells, mortars and pieces of sunken landing craft fell through the water column amid the fire and mayhem, coming to rest on the sea bed. Much of it has been colonised by the reef, encrusted with sponges, corals and oysters to the extent where their man-made provenance is barely recognisable. On sandy patches live rounds and shells have fallen and some glisten in the sunlight looking like they fell 7 days, rather than 70 years, ago. One must resist the temptation to remove WWII bullets from the reef as a memento.

... Our first time experience with Dive The World was very good and we would choose them for our next trip. Communication and payment process were quick and reliable. We appreciate the wide range of offerings ... -- Stefanie Phoenix, Germany.  [More customer reviews]