Muck Dives in the Lembeh Strait

Diving in muck. Not a very appealing term is it? What it doesn't make me think of is beautiful azure waters, patrolled by sharks and festooned with multi-coloured coral. However, for those who know, muck diving is the new type of ... err ... diving. Gradually word is getting out that there is much more to certain underwater areas than first meets the eye. Most scuba divers first entered the underwater world to experience the unknown; to see sights they found unusual and other-worldly; to feel a sense of discovery. Muck diving therefore is the scuba equivalent of a re-birth.

No wonder that muck site zealots preach the word with all the enthusiasm of a Southern Baptist at a Republican fund raising convention. For those who love critters there are many sacred sites however, verily I say unto thee that the one promised land is the Lembeh Strait.

The strait separates the island of Lembeh from the mainland of North Sulawesi in Indonesia. You fly into Manado, which from Singapore is a 3.5 hour direct flight. This channel of water flows over black volcanic sand. Big tankers travel up and down the strait. There is not much coral to shout about. All evidence suggests that below water would yield an inferior underwater experience. However, Lembeh hides its talents under a bushel. Look closely and you will see there are several resorts lining the water's edge and a few liveaboard boats here too. It was on to one of these boats that I stepped unaware of what was awaiting me and without any great expectations. 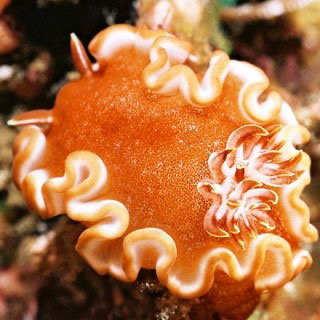 My first dive at Nudi Falls instantly convinced me that the hype about Lembeh was no exaggeration. It was as if someone had spilled a big box of nudibranchs overboard, such was the proliferation of them in so many varieties all over the sea bed. As the wonder of that was about to subside, we came across a red sea fan playing host to no fewer than 6 pygmy seahorses.

My second dive at Police Pier II added further to the list of interesting creatures, with so many frogfish that I gave up counting, Banggai cardinalfish, pink squat lobsters and fingered dragonets. As with many of the sites here, it was pretty shallow so you can take your time (sometimes 80 minutes!) to get the most from the dive.

My first Ambon scorpionfish and my first hairy frogfish we duly ticked off my mental wishlist at dive number 3, Jahir. This was the shape of things to come - more weird and wonderful creatures than you could have thought possible. All those bizarre animals I thought existed only in fish books were appearing before my very eyes. I was having a scuba epiphany!

If the dives during the day were a '9 out of 10' then the night dives on this trip were a solid 10. I nearly didn't bother with night dives because, after such a rewarding day's diving I was more than happy to sit back with a cold beer after a hot shower and re-live the day's highlights. However, I was convinced to get wet again with the promise of sex - dragonet mating that is. What a spectacle! As with some humans it can take a while to break down the female's defences, as she acts coy and disinterested. However, with a little persistence and a good line in dragonet, charm she finally comes across and they rise from the bed in unison. I swear the male peered over the female's shoulder and flashed me a wink!

Just thereafter, as if that was not enough, I saw one of the weirdest things ever, a bobbit worm. It is an alien-looking beast, with its open claws and tubular coat of many colours. I made light with my torch and I saw that it was good, as the bobbits responded to the beam by raising their bodies out of their burrows in full display!

We later came across the buried face of a stargazer, known in Italian and the priest fish, since it stares piously towards the heavens; another amazing photographic subject from one of the best dives of my life.

Day 3 of the trip and another first for me, a flamboyant cuttlefish. In fact there were 2 together, whose beautiful undulating skin mesmerized me.

The Icing on the Cake 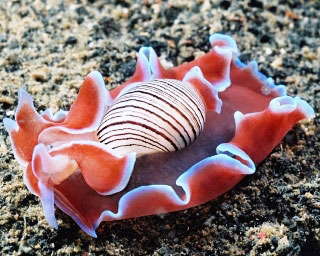 By this stage I was getting greedy and started doing what I swore I would never do - asking the guide to find me particular creatures. In my case all that was left on my dream list was a blue ringed octopus and a mimic octopus. I had previously seen quite a few 8-armed beauties, although I was not sure what species they were and was unable to find them in the guide books. I had to wait only until our next night dive, when I heard excited muffled squeals and went over to investigate. Before me I saw a shape no larger than a golf ball. On closer inspection it was a blue-ringed octopus. As I got close with my camera the rings of blue shone vividly as the venomous little champion made its way into my photographic collection and into my heart. Yes!

As I went to bed before my final day's diving, I considered how amazing this liveaboard trip had been. I had seen more extraordinary sights in this short period than I thought a lifetime of normal reef diving could provide. My photo collection was suddenly impressive (even to me!). OK, so I hadn't seen a mimic octopus but I had already witnessed more than I thought I deserved.

As if to finish with a flourish, the Gods of Lembeh granted me my wish on the final day. At the end of the dive, with not a great deal of air left and with my camera memory all but full, it appeared. The DM proudly indicated that this really was a mimic octopus (although it appeared to be mimicking an octopus at the time!) and my list was complete!

And that was that. I am now back in my home and have been through the guide books to find more creatures for my next list. Top of that? Rhinopia. These days while everyone else fins along in the blue, diving over beautiful coral reefs, you might just see me scouring the sandy floor with my macro lens at the ready. I have seen the light! I am a born again muck diver!

... I had originally contacted Dive The World and several other agents to inquire about joining the Mona Lisa's liveaboard. Dive the World was the only one to respond with other options for me that worked within my budget and timeframe. I never would have known about Calico Jack if it weren't for the suggestion from Dive The World. I appreciate the helpful suggestions, rather than just saying what I wanted wasn't available. I appreciate all the help with planning my trip so last minute ... -- Rachel Berkley , USA.  [More customer reviews]