>Newsletters>September 2008>What is Muck Diving?

Getting Down n Dirty... 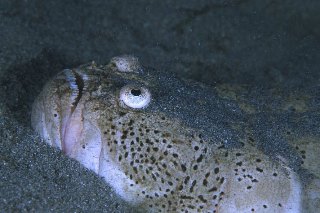 If ever a pursuit were badly named it must surely be this. Searching for some of the planet's most bizarre and fascinating creatures, in the medium of water where one's eyes widen upon each surprise and one's sense of wonder grows with every new discovery. Yet we call it muck diving, which sounds like the unenviable task of a sewage worker!

So where did this term come from? Isn't it just the same as looking for small stuff? How long has this activity been around? Do you need any specialist skills to be a good muck diver? OK, OK, enough with all of the questions! Let's delve into this mysterious and peculiar world and see if we can sift through the dirt and bring you some clarity.

Let's make no mistake. Muck diving is not in fact the same as macro diving. The terms have often been used interchangeably and there is indeed a great degree of crossover but in reality, it is a subset of macro; it is in fact just one of a number of macro dive environments.

Macro diving means to dive with small stuff in mind. So when you are peering through clear water at sea fans looking for pygmy seahorses or chasing a mantis shrimp along a white sandy floor, past a ribbon eel poking out of a nook in a reef, you are macro diving ... and that my friend, ain't no mucking about.

When you are scouring the dark, often silty and detritus-strewn sea bed, and coming across all manner of incredible critters appearing against the dark background, you are diving in muck.

The term began appearing in the 1980's after a group of divers, who were on a liveaboard at anchor at Dinah's Beach in Papua New Guinea, decided just to throw on their gear and jump in. They were advised against it since they were in a shallow, silty inlet and this wasn't (then) anything like resembling a "dive site", but in they went.

What they saw has added a whole new dimension to the world of recreational diving and contributed immensely to the world of science and our understanding of the marine environment.

Muck dive conditions tend to involve factors such as black sand or grey silt sea bottom, with a source of fresh water and some current, preferably cross-current. So the best and truest conditions are prevalent in areas near river mouths in a land where there is volcanic activity.

Volcanic lava and ash is mineral-rich and very much a source of reef regeneration. It also provides extreme and testing conditions that force animals to adapt or die, hence the proliferation of unusual and endemic creatures. This explains why countries such as Indonesia and Papua New Guinea enjoy such excellent muck diving conditions.

In such conditions there are seldom pristine reefs around the vicinity. The environment may be too brackish for the symbiotic coral algae to flourish and the substrate is not conducive to coral colonies settling and flourishing. Visibility is often poor in muck since the bottom composition is loose and silty and easily stirred up.

The truest muck sites also tend to be those which feature a lot of rotting tree trunks and other vegetation as well as man made rubbish, much of which has been adapted by the creatures into shelters.

In truth if you didn't know any better you would think that you were diving in the wrong spot since, there is very little to see in the way of the classic, colourful reef scene with gin clear water and shiny, happy divers 'OK'ing the camera.

Muck diving means getting down and dirty and scouring the floor, your nose inches from the sea-bed. In such circumstances visibility, or lack of it, becomes almost irrelevant.

There are a number of creatures that are particularly prevalent at a good muck diving site. Frogfish, octopus and seahorses are regularly spotted at good macro sites, but you can also expect numerous sightings of them in high quality dive sites which enjoy true muck conditions, as the black sand tends to bring out the weird and wonderful in large numbers.

In dark, silty conditions you are more likely to see snake eels, Pegasus sea moths, stargazers and flambuoyant cuttlefish. Seahorses often abound in muck, where a variety of octopus including the much sought-after blue ringed octopus can be quite common.

Areas like the Lembeh Strait are surely among the only destinations that offer Rynopias, Ambon scorpionfish, fingered dragonets and mimic octopus in such numbers. Flying gurnards and flounders are also present in muck conditions in much larger numbers than other habitats.

So where can I find the world's best muck diving?

If we are going to talk specifically then we have to go straight to the top. For boxing you start with Ali, for Rock 'n' Roll - Elvis, and for muck, the one and only Lembeh Strait in North Sulawesi, Indonesia. An overstatement? No.

At the time of writing and to our best knowledge there is nowhere better. A special mention goes out to Milne Bay in Papua New Guinea of course which could share the throne and be Queen to Lembeh's King, but Lembeh wants for nothing when it comes to muck diving excellence.

In Indonesia, Ambon has always been, and Alor is fast becoming, highly regarded as muck diver destinations. Sangeang Island, near Komodo, is a volcanic island that is a popular dive spot on Komodo liveaboards, due to the fascination that its black sand holds with experienced muckers.

Then in Bali, you can visit Secret Bay in the north west, or Seraya's Secrets off the coast of Tulamben, which enjoys a dark sandy floor where muck divers instinctively flock like the salmon of Capistrano.

The problem with listing other muck destinations is in the current use of the term. Many people erroneously use the term interchangeably with 'macro diving'. So if you read of somewhere that describes itself as "great for muck diving", it may just mean that some small things live there. True muck scuba divers may be disappointed.

Think about where you have ever seen a black sand beach. Fiji is volcanic, Hawaii too. In fact there are clearly lots of places which potentially have awesome muck dives. Coral reefs filled with fish have been identified and explored in depth ever since the invention of the aqualung. But now is the time for discovering new muck sites.

Muck dive pioneering is an adventure that can still be had. There must be thousands of secrets waiting to be given up to the grateful eyes of their pioneering explorer. Imagine the thrill of being that guy! Not long ago and a couple of years before his unfortunate death, the great Larry Smith was invited over to Yap to have a poke around and see if there was anything there worth talking about. Yap has since been lauded as another place where small stuff abounds and has many great macro, if not muck, sites.

Find yourself somewhere where you see black sand, grab a couple of tanks and head in. You could be on the verge of discovering somewhere special. You could have dive sites named after you... and please contact us if you do!

... Website is good. Response was extremely fast. Dive The World offered the best price, so we chose to book through you. Very efficient customer service and quick turnaround of requests. Immediate response, even at weekends ... -- Nina Marose, Singapore.  [More customer reviews]