Is it a Snake or is it a Flounder?!

There are many creatures in the sea that scuba divers long to have encounters with and one's own personal list can change with experience. Once sharks, turtles, manta rays and other obvious marine wonders have been experienced then each person develops their own personal goals. One creature that is high on many experienced divers wish list is the incredible mimic octopus.

Is this creature really as 'talented' as we are all told? Are mimics hugely intelligent aquatic chameleons or humble invertebrates simply going about their business? Is it the observers who are attributing skills to them that in fact they don't possess?

Let's see if we can uncover some truths about the fascinating creature that is the mimic octopus ... 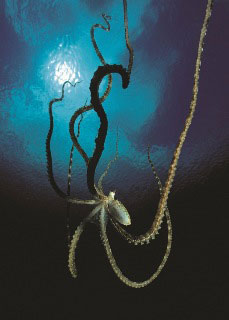 Mimics are normally quite small, growing only up to 60 cm (2 feet) long and have a body covered with brown and white stripes or spots, although in a resting state their body colour is more of a pale brown or beige. Their tentacles are around 25 cm in length and no more than pencil thick.

As with all octopus, the mimic has 8 arms, a mantle containing 3 hearts and other internal organs, and a siphon used for jet propulsion. The arms have 2 rows of suckers, each sucker having a touch sensor and a chemoreceptor, allowing the mimic effectively to feel and taste its food before it eats it. It has a large brain but lacks the sense of hearing.

Like all octopus the mimic has pigment sacs on the skin called chromatophores which can be contracted or expanded to produce rapid changes of pattern and colour.

To distinguish any octopus from another you need to know what to look out for in terms of size and colouration. Since divers are so keen to declare to themselves or others that they have seen a mimic octopus, they can often mis-identify other species. Most commonly it is the wonderpus that is mis-identified because it has a similar size, shape and general colour, and also lives in similar habitats to the mimic. An experienced observer will know the wonderpus by the presence of strong white markings which are fixed and therefore do not alter when at rest or in an excited state. Mimic octopus are only believed to have been officially 'discovered' as recently as 1998, off the coast of Sulawesi in Indonesia.

Mimics either stalk their prey or can be seen foraging over an area of sand, probing into holes using the tips of their fine arms to flush small crustaceans and fish into its suckers, and from there into its mouth.

It is the behaviour of the mimic octopus that gives it its name and makes it stand out from all other species. Although a lot of human interpretation of animal bahaviour is guesswork, there are strong reasons for believing that when it comes to this octopus, you can believe the hype.

Mimicry is commonly used as a survival strategy in nature. However the mimic appears to be able to take on the appearance of not just 1 other species, but of several. The fact that all of the species it imitates are venomous, adds to the likelihood that this is an evolved and deliberate strategy. To the cynics, the mimicry is no more than divers seeing more than what is actually there. So what creatures does this octopus mimic?

Lion fish - when the octopus hovers above the sea bed, with its arms spread wide and trailing a little from its body, it does not take a great leap of imagination to see the form of a lionfish. In that shape and posture, and with the brown and white stripes, it is indeed conceivable that to the eyes of a potential predator, what might otherwise look like a tasty snack, appears in fact as a highly venomous creature that represents a none-too-appetising prospect.

Sea snake - when the octopus buries all but its eyes and 2 arms below the sand, what remains in view is a long thin object with white and black bands running across the elongated body. Again the prospect of tangling with the highly venomous sea snake is something many predators would not relish, and they therefore may swim off leaving the octopus to live another day.

Sole/flatfish. By pulling its arms together and moving forward along the sandy floor, the body colour and shape and gliding motion all seem to ape that of a poisonous striped flat fish. It has also been said that with a similar motion, but with 1 arm dragging out behind, it imitates a stringray.

Which variation is seen seems to vary depending upon the particularities of the predators in the area. Factors such as the proximity, appetite and environment present may all affect the choice that the mimic makes. According to some scientific observations this theory was reinforced when a mimic octopus under attack by damselfishes, adopted the appearance of the banded sea snake, a predator of the damselfish. There is a longer list of animals the mimic is said to imitate some of which are less convincing than the above examples and include brittle stars, sea shells, jellyfish, Don King, mantis shrimp, anemones, and giant crabs whom they are said to imitate as an apparent mate, only to attack and eat its would-be lover.

In mating, the male octopus inserts its hectocotylus, a specialised and extended arm, into the female's mantle cavity, where he deposits packets of sperm. Soon after the hectocotylus falls off(!) and before too long the male will die. The female fertilises, and then carries the eggs in strings while continuing to feed, a feature unusual for octopus. The larvae hatch and shortly thereafter the female dies. The larvae drift as plankton until they mature, when they sink and begin life on the ocean floor.

The mimic is said to live for only around 9 months, which must feel like a maternity!

Being a fleshy creature with no bones, no spines and no poison, this makes the mimic octopus a very interesting proposal to anything in the sea with teeth and a stomach. In the estuarine conditions that mimics favour this may mean fish including small sharks and barracuda. Therefore it is believed that the mimicry is the form of defence that this octopus has evolved.

They seem to be restricted to the Indo- Malay archipelago, and are common around Sulawesi. However, while divers have been poking around reefs for years and years, the kind of diving which takes place in their habitat (muck), has been a reasonably recent pursuit. It may be that mimics are more widespread and found in silty estuarine conditions elsewhere, but only time will tell.

Their preferred habitat is relatively shallow water normally less than 15 metres deep where there is a sand or silt substrate, so often this means near river mouths or estuaries. Unlike other reef-dwelling octopuses habitats, there are not hiding places galore within the habitat. Despite this, the mimic forages in daylight which one would expect makes this soft bodied, non venomous creature a prime target for predators. However the mimic clearly thrives in its environment and many believe this boldness is possible only because of its ability to impersonate other venomous creatures.

Very little is really known about the mimic octopus and how their numbers may have fluctuated over time. Given that they often live in marine areas near river mouths, it can be assumed that chemicals released into the water system pose a risk to their numbers in the same way as it would to all marine life in such an area. However there is currently insufficient data on how populations thrive or suffer under different conditions.

Dive sites in the Indonesia - Malaysia region, where there are volcanic sand sea beds, are the most likely spots for diving with mimic octopus:


Dive The World Recommendations: Lembeh Strait and Bali in Indonesia, and Lankayan Island in Malaysia.

... Vic was very helpful. All of our questions were answered in detail which made shaping our itinerary easy and effortless. We were never kept waiting and every email we wrote was met with a fast and pertinent response. The booking process was also effortless and all of our requests were realized. We had such an easy ride when booking our holiday it's difficult to point out any weaknesses ... -- Alexander Hislop, UK.  [More customer reviews]