There are not too many dive sites in the world that can boast the presence of the magnificent Mola Mola, but those that do are rightfully proud of the fact. Diving with sunfish will provide you with an unforgettable memory - the odd looking flat disc lolling near the surface staring at you with its large dopey eyes. Dives with these creatures are great, but all the more special if you know a thing or two about the stars of this show ...

The oceanic sunfish, is surely one of the most unusual looking creatures in the sea. The German name for this fish is "Schwimmender Kopf" meaning swimming head, which gives you some idea of what Mola Mola look like.

If you were diving near the surface at Nusa Penida in Bali, or at Punta Vincente Roca in the Galapagos Islands, you might see this large almost flat, awkward looking creature appearing just like a large head equipped with long sweeping fins atop and below. With a body less than twice as long as it is deep, sun fish tend to loll near the surface seemingly sunning themselves. Diving with one makes for a life time experience to remember.

Mola Mola are usually found in oceanic waters, but occasionally come inshore. This happens between July and September every year in Bali, making these months the best time to see these fish. Because they are often seen at the surface, sunfish are sometimes mistaken for sharks because of the large dorsal fin which protrudes into the air and sometimes flaps comically. 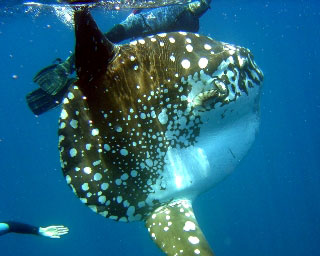 Normally of a silver opalescent colour, they can exhibit amazingly changeable patterns of spots. One whopper measured at 3.1m in length was found to weigh 2,235 kg, making the Mola Mola the heaviest bony fish in the world.

A few years ago a sunfish got stuck on the bulbous bow of an Australian cement carrier, slowing the ship from 14 to 11 knots. The huge fish was removed and weighed in at approximately 1,400 kg and its skin was so rough that it had worn the ship's paint work back to the bare metal.

Mola Mola, as you might guess from their appearance, come from the same order as puffers and porcupine fish. The name of the order, Tetraodontiformes, refers to the 4 fused teeth that comprise the sunfish's characteristic beak.

Mola Mola are often seen near the surface, swimming either upright, dorsal fin flailing from side to side as it seems to waddle underwater, or flipped over swimming on its side, like a solar panel soaking up the rays of the sun.

Despite the Sunfish's big size, and even though it can muster a surprising cruise speed, it isn't very agile in the water. It's quite a docile fish and poses no threat to divers. Although Mola Mola are usually shy creatures, they have been known to get used to divers at certain dive sites.

Sun fish related injuries are very rare, but records of large Mola Mola leaping from the water onto boats do exist. They are more of a threat to boaters than they are to divers, because a collision with a sunfish can sustain substantial hull damage and their chunky, heavy bodies can get trapped in the propellers of large ships.

A large part of the Mola Mola diet consists of jellyfish, complemented by squid, crustaceans, eel grass, fish larvae, small fishes, zooplankton and comb jellies. Despite the variety of the diet, the nutritional value of these snacks is quite low. To sustain the size of a sunfish, much has to be consumed and thus they ingest copious amounts of food. As the diet suggests, they feed across the ocean depths, from the surface to deeper waters and, in some areas, even the ocean floor.

The teeth of the Mola Mola have fused to form a beak of sorts, used for cracking the hard-shelled part of the diet. The small mouth, combined with sucking in and spitting out water, is ideal for ripping the flesh of softer prey. Along the throat pharyngeal teeth are located, which grind bits of food into even smaller pieces before it ends up in the stomach.

The mating grounds of sunfish are said to be in scattered around the world and their mating ritual and practices remain poorly understood. What is known is the female Mola Mola produce the most eggs amongst vertebrates, in fact, holding the Guinness World Record - in excess of 300 million eggs once uncovered in a 1.5m specimen. Eggs are released into the open water, where they are externally fertilized. There are no nests and mothers do not watch over their spawn.

Usually known as solitary creatures, exceptions are made during the breeding season, when they can be observed swimming in pairs.

From eggs set adrift in the open ocean, a larvae, almost impossibly small considering the adults they will grow into, will hatch. The larvae of a sunfish are less than 2.5 mm in size.

The larvae develop into fry, and it's at this stage that the family connections to pufferfish is most evident in the Mola Mola. The fry has large pectoral fins, a tail fin and a spines on its body, making it look very much unlike the offspring of the porcupinefish.

The fry are in the habit of schooling for protection. The bigger the fry gets though, the less prominent these puffer-like features will get and both spines and tail fin will eventually disappear, as will their tendency to school.

In captivity sunfish have been known to live for up to 10 years, but in the wild it is said they can possibly live for over a 100 years.

Their growth rate is undetermined, but a young Mola Mola at the Monteray Bay Aquarium went from a skinny 26kg to 399kg in a mere 15 months. It also sprouted to a height of nearly 1.8m. It is generally accepted that sunfish larvae will become millions of times bigger during their life cycle.

Most small predators choose something easier to eat than the large sunfish with the thick, elastic skin, although small, younger ones could easily be gobbled up by tuna and dolphin-fish.

Adults most often fall prey to killer whales, sharks and sea lions. Sea lions seem to hunt them for fun. Without dorsal fins, Mola Mola are effectively immobile and sea lions often go for the dorsal fin first. Once the fish is immobilised, the sea lions toss the body around by diving deep and then shooting up to ram its side with their head. A helpless but uneaten and still living sunfish is then often left on the seabed to die.

Humans also prey on Mola Mola, which although they contain the same neurotoxins as puffer fish, are still considered a culinary delight in Japan, South Korea and Taiwan. In the European Union the meat is banned. Certain parts of the fish are also used in traditional Chinese medicine.

Apart from specifically fished sunfish, they are often also victims of gillnets, albeit accidentally. Other causes of death include collisions with boats and getting sucked in by the propellers of larger vessels. Trash such as plastic bags are also its enemy because it becomes unable to close its mouth, consequently sucking in most of what crosses its path, edible or not. Debris can cause injury and death.

Mola Mola are found the world over in both temperate and tropical waters. Differences between those found in the Atlantic and Pacific oceans have been noted, although differences between individuals from the northern and southern hemispheres are minimal.

In spite of also being called sunfish and arguably spending much time at the surface soaking up the sunshine, researchers believe Mola Mola spend a great deal of time deeper than 200 metres, hanging around as deep as 600 metres.

Preferring warmer waters, prolonged exposure to temperatures lower than 12°C could be disorientating and might even lead to the death of the fish. One theory why they sun themselves near the surface is for the purposes of a thermal recharge after diving to the cold depths of the ocean.

Much about the sunfish biology remains unknown or poorly understood, with research under way. Through satellite tagging, areal surveys, analysis of tissues samples and anecdotal evidence, data about this strange majestic creature is constantly being gathered.

Due to open variables such as growth rate and maximum age, the impact of accidental fishing, commercial fishing and death by predators or pollution is yet to be fully discovered.

... Very efficient at organising our holidays and recommending accommodation for us! So much easier than having to sort it out yourself. Also for the past 2 holidays (Nusa Lembongan and Sipadan), they have been great at recommending great dive operators. We trust Dive The World to suggest the best operators and places for us! ... -- Sonia Kua, Australia.  [More customer reviews]