The Oceanic Sunfish - Mola Mola - surely one of the most unusual looking creatures in the sea. The German name for the sun fish is "Schwimmender Kopf" meaning swimming head, which gives you some idea of what they look like. 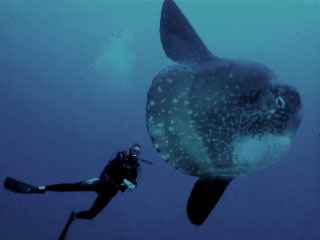 If you were diving in Bali, near the surface at Nusa Penida, you might see this large almost flat, awkward looking creature appearing just like a large head equipped with long sweeping fins atop and below. With a body less than twice as long as it is deep, they tend to loll near the surface seemingly sunning themselves. Diving with one makes for a life time experience to remember.

Ocean Sunfish are usually found in oceanic waters, but occasionally come inshore. Because they are often seen at the surface they may be mistaken for sharks, because of the large dorsal fin which protrudes into the air and sometimes flaps comically.

Its tail is rounded and its coarse skin is covered with enormous amounts of mucus. Normally of a silver opalescent colour, they can exhibit amazingly changeable patterns of spots. One whopper measured at 3.1 metres in length was found to weigh 2,235 kg making it the heaviest bony fish in the world. 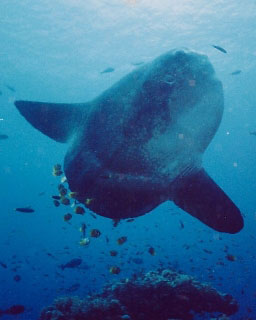 Molas as you might guess from their appearance, come from the same order as puffers and porcupine fish. The name of the order, Tetraodontiformes, refers to the 4 fused teeth that comprise their characteristic beak. Puffers can defend themselves by taking in water and puffing up, whereas Oceanic Sunfish suck and spit chiefly to render their prey items into bite-size pieces before ingesting the morsels using their long, claw-like teeth in their throat.

It has a deep body that attains a maximum length of 3.3 m. Sunfish are harmless to people, and feed on jellyfish, salps, ctenophores and occasionally small crustaceans and fishes.

Molas produce an impressive number of eggs. A 1.4 m female was estimated to be carrying 300 million eggs in her single ovary which to date remains the largest number of eggs ever recorded in a single vertebrate at any 1 time. After hatching, the larvae expose their affinity to their spiky pufferfish relatives by looking more like swimming pincushions than Molas. As they grow the spines disappear, as do their tails.

A few years ago a Mola Mola got stuck on the bulbous bow of an Australian cement carrier slowed the ship from 14 to 11 knots. The huge fish was removed and weighed in at approximately 1,400 kg and its skin was so rough that it had worn the ship's paint work back to the bare metal.

Although they are considered tropical or subtropical fish, they are regularly sighted in temperate climates. Mola Mola are in fact weak swimmers and some are carried by the Gulf Stream to places as far north as Scotland and the coast of Antrim in the north of Ireland.