>Newsletters>September 2009>Diving Under the Weather

Rashes, Reactions and the Runs – A Note of Caution for Divers

We all know that diving is amazing and a great way to commune with and marvel at nature, but when venturing beneath the waves, we are entering another world, with different rules and occasionally there are some minor annoyances to deal with. So before you set off on holiday, arm yourself with some useful advice to ensure your diving holiday is free from unexpected medical mishaps.

Scuba divers are very aware of the importance of protecting the ecosystems of coral reefs and avoiding contact with them, but accidents do happen. The most common cause of diver injury is from brushing against the coral. Often this is nothing worse than a little scrape that you might get from falling over on the street. However, various living organisms like coral polyps, algae, bacteria and stinging nematocysts may get embedded into the wound causing complications.

The treatment can be unpleasant and is not for the faint-hearted. First you need to energetically scrub the injured area with soap and water and then douse the wound with a half-strength solution of hydrogen peroxide and rinse well. Thereafter, apply antiseptic or antibiotic ointment under a dressing. Sometimes secondary infections set in and medical assistance will be required for repeated applications of "wet-to-dry" dressings and/or a course of antibiotics.

The best prevention is a quick refresher course on proper buoyancy control, especially if it has been a while since you've been in the ocean.

You can dive for years and never once experience a nasty encounter with anything in the ocean, especially if you play by the rules and do not go disturbing what are in effect, wild animals in their natural habitat, not yours. Sometimes however, reality bites and your underwater reverie balloon is suddenly pricked by the sensation of pain. What could it be and how can you avoid unpleasant encounters while diving? Here we consider the most common causes of marine life attack…

We all know that titan triggerfish will protect their young by attacking anything that swims too close above their nest, and some divers have been known to sustain a nasty bruise or even the loss of some part of any fleshy appendage that happens to be exposed, like a nice, soft ear!

Sea snakes are far less prone to attack than land snakes, however sea snake venom can be lethal. Bite victims require an antivenom injection to avert renal failure and cardiac arrest. The wounded extremity needs to be immobilised and pressure bandages applied. CPR may be required. Thankfully sea snakes tend not to be that interested in approaching divers, usually merely biting to defend themselves when stepped on. Their jaws are said to be only capable of successfully attacking the thinnest areas of skin on the human body, so attacks remain rare.

The bite of the Blue-ringed octopus injects the nerve toxin, tetrodotoxin, which paralyses the neuromuscular system. Immediately flush the wound with water, immobilise the area and apply a pressure bandage to slow the spread of the poison. CPR may be required.

These octopus are not common and usually only seen in areas where muck or macro diving is the prevalent form of scuba. They are also very small and vividly coloured so content yourself with simply seeing one. No antivenom exists, so no matter how cute they look, do not touch them under any circumstances.

Electric or torpedo rays can give electric shocks of up to 220 volts. You will presumably be well briefed before any dive where these creatures are present and to ignore the dive guide’s words of caution would indeed be a shocking thing to do! The biggest danger is that the diver may be rendered unconscious and unable to surface alone. Also, as the untimely death of naturalist Steve Irwin shows us, other rays are capable of attack with devastating consequences. You would be well advised not to swim closely and directly overhead these creatures nor to ever make them feel cornered.

There are plenty of stinging creatures in the sea. Some are minor irritants, others more worthy of caution. ‘Sea lice’ are crustaceans that live parasitically on fish and can inflict tiny bites on exposed flesh that might sting for a minute or so but, other than the initial sensation of a stinging prick-like pain, cause no major damage. The Box jellyfish may be deadly, inducing death within 5 minutes. Treatment requires an immediate intra-muscular injection of antivenin. Cardiac and respiratory resuscitation may also be required. Yet another reason not to dive alone as the pain of the sting would normally render a diver unconscious and unable to surface unaided.

Fire coral, hydroids, sea wasps and anemones render less severe stings. Oral antihistamine and/or injectable epinephrine are sometimes required for allergic reactions. The wound from stinging animals needs to be soaked in vinegar for at least 10 minutes to inactivate the nematocysts in the tentacles. These stinging cells can be removed by shaving. If stranded on a beach a useful trick is to collect wet beach sand in a clamshell and rub it against the affected area.

On that note, collecting shells may seem like an innocuous past-time, but live cone shells fire darts which are deadly, requiring CPR. Keep airways open and be prepared for nausea. No antivenom exists at this time so the best defence is not to handle them. Beware of other venomous creatures: injury from the seemingly inoffensive stonefish may require an antivenin injection. 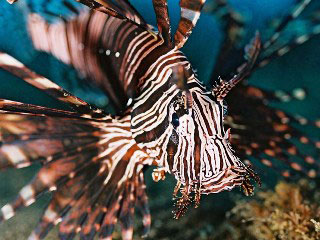 In addition, lionfish, scorpionfish, stingrays, crown-of-thorns, and some sea urchins inflict poisonous stings. The venom toxin is destroyed by heat, so immediately immerse the wound in hot water (43.3-45°C), which will also help to alleviate the pain. Thereafter you can attempt to carefully remove the spines and treat the wound with antiseptic creams to avert infection.

So, you've had a glorious first dive of the holiday and while luxuriously sipping a 'Siam Sunrise' on your private balcony, just can't help feeling a little bit proud of how smoothly it went. Before going down to dinner, remember that ingesting the flesh of many large marine animals may often cause food poisoning. It could result in lots of time on the toilet, in bed, or even in hospital.

Ciguatera is by far the most common cause of seafood poisoning. The species most responsible are hawksbill turtles, groupers, moray eels, barracudas, red snapper, jacks, hogfish. Ciguatera toxin is found in blue-green algae growing on coral reefs, where it is eaten by smaller, herbivorous fish and then passed up the food chain until it is concentrated in the tissue of the larger fish consumed by humans. The presence of Ciguatera is totally undetectable by smell or taste and it is unaffected by the heat of cooking. Symptoms occur within half an hour. Treatment is largely symptomatic and the diet is restricted to exclude all fish, alcohol and nuts, which could put a bit of a damper on your scuba diving holiday.

Other large fish concentrate toxins in similar ways. Sharks livers are dangerously high in vitamin A. Dolphins and tuna have been linked with mercury poisoning. Shellfish taken from polluted areas can impart bacterial and viral infections, like Hepatitis A. Despite pufferfish being consumed in parts of Asia, their organs and skin often contain the lethal neuro-toxin tetrodotoxin, which increases during the reproductive season.

Prevention is Better than Cure

Briefly, to avoid the worst cases of medical emergencies while diving, here are a few safety tips:

Do rest assured that the majority of reputable operators’ dive boats carry a first aid kit and divemasters are trained to deal with such incidents or seek urgent medical attention when required. As you will have discovered while reading, all of these dangers can be prevented by demonstrating a healthy respect for marine life forms and creatures while scuba diving.

They say knowledge is power and by following the above tips you will empower yourself to have an enjoyable, fun-filled diving holiday.