A ghostly shadow appears to emerge from underneath the rain clouds. It grows more distinct as the boat continues on its southwest heading. Soon a rugged shoreline with crashing surf outlines the base of Isla del Coco; Cocos Island. The steep basaltic cliffs reach skyward into the mist that surrounds the upper reaches of the island. I have a strange premonition that this diving trip will be unlike any other in my 20 years breathing underwater. 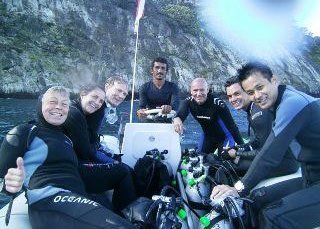 It has been 40 hours since our liveaboard vessel, MV Adventure, weighed anchor at Quepos, Costa Rica and cruised 325 miles from shore to make landfall at this remote outpost in the Eastern Pacific Ocean. Isla del Coco, the remnant of an ancient volcano, lies atop an underwater ridge that extends hundreds of miles to the south and includes Malpelos and the Galapagos Islands.

Steep cliffs ring Isla del Coco, giving birth to beautiful waterfalls cascading from the heights. When it rains, as it does quite often, many other smaller waterfalls appear, and the island seems to weep. It must be lonely so far out to sea with nothing but rain as a constant companion. Dense vegetation completely cloaks the land. Prehistoric dinosaurs would feel right at home in this primordial world. In fact, Cocos Island was the model for the movie, Jurrasic Park. It is also rumored that a fortune in pirates gold is buried somewhere on the island, and through the years many have sought to uncover the treasure. None have been successful. Time and jungle have erased all the evidence.

Our interest though lies beneath the water's surface. The pristine conditions harbor a wealth of pelagic sea life and smaller fishes in prodigious numbers. This is the modern day appeal, the treasure of Cocos Island. People come from around the globe to savor the rich, untouched, underwater environment; people like me and my loving wife, Judith. Our Alaskan home is another world. Winter's freezing weather was just around the corner when we left the far north for this tropical paradise 6.5 degrees north of the equator.

Soon we enter Chatham Bay on the north end of the island and tie up at one of the 4 mooring buoys. We see one of the ranger stations hiding behind the coconut palms on the sandy shore. The MV Argo, another dedicated liveaboard dive ship, is anchored ¼ mile distant. Rugged, precipitous Manuelita Island thrusts out of the bay behind it. All thoughts turn to scuba diving as the other 5 guests and ourselves prepare to dive into the depths. 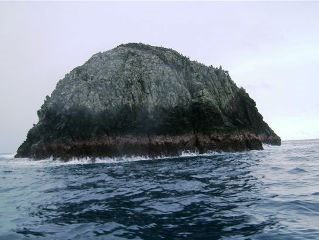 The first dive at Cocos, Manuelita Shallows, starts on a wall with a contrary current. After clawing along the bottom for a few minutes, we climb around a corner and the current subsides. Relaxing now, I am speechless as I observe the underwater landscape. The visibility is much better than I expected, probably 60-70 feet. There is a multitude of white-tipped reef sharks lying on the bottom. Large schools of blue-gold snappers swim about in unison. Lobsters crawl back into their lairs. Starfish colonies lay scattered about.

There is a coral reef here and many small reef fish scurry as we swim by them. Surgeonfish, angelfish, blennies, and wrasses, the list goes on and on. Everywhere one turns to look, the abundance of life is overwhelming. It is a sensory extravaganza, and this is just the beginning.

Each day holds the promise of 4 scuba dives and no one wants to miss even one. Breakfast begins the day at 6 am, followed by the first dive at 8 am, the second around 11:30 am, followed by lunch at 1 pm, the third dive around 3 pm and the fourth starts by 6:30 pm. After a late dinner, everyone literally falls into slumber land to await the morning sunrise. Then routine ensues and the cycle begins again. The liveaboard remains anchored at Chatham or Wafer bays. Hard-bottom rubber Zodiac-type boats with 100 HP outboard motors ferry us to the sites and follow our bubbles as we explore the wonders of the dive sites of Cocos Island.

Many of the dive sites are sea mounts jutting out of the water 70-80 feet. Under the surface, steep barnacle-clad walls broken by small pinnacles and ledges plunge to a sandy bottom waiting below in the depths. Big schools of jacks and snappers mill about the small pinnacles. Marbled rays glide by, and white-tipped reef sharks cruise the area or lie on the bottom. Off in the distance scalloped hammerhead sharks peruse the spectacle. Silky sharks swim nearby. Overhead surf crashes against the sea mounts and the resulting surge rocks scuba divers to and fro 70 feet below.

Other sites consist of seamounts that approach, but do not reach, the surface. We descend on permanent lines attached to the bottom. The current is stronger here, and the lines allow us to descend easily instead of struggling into the current. 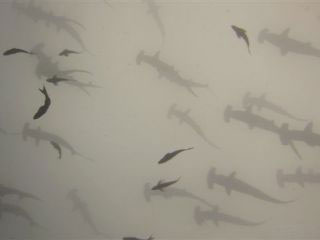 We reach the bottom and find a vantage point. We look up to scores of hammerheads idling into the current. This is one of Isla del Coco signature sights, schooling hammerheads. Where do they go? Why do they school? Scientists think they may travel between Isla del Coco, Malpelos Island, and The Galapagos Islands navigating by magnetic fields emanating from the ocean bottom over which they travel.

Huge schools of jacks slowly drift along the wall beneath us seemingly impervious to the current. Moray eels poke their toothy smiles from crevasses in the ledge. Nature reigns supreme here. It swims all around us.

The night dives are also very interesting. As we hover at 20 feet or so, hundreds of white-tipped reef sharks explore every nook and cranny in the coral heads 10 feet below us. I hope all the reef fish are hidden away from their lurking jaws. It looks like pandemonium as they race about sometimes actually bumping into scuba divers. No wonder they rest during the day.

Lobsters clamor between hiding places. Sea cucumbers ply their nightly vigil. Occasionally, blue-finned trevallies shoot in and out of our light beams on their nightly rounds. The days pass rapidly, punctuated only by wonderful meals and naps between dives. The Adventure liveaboard boat crew does their best to make the trip memorable and the divers fall into a pattern of diving, resting and eating.

We visit the ranger stations on shore and learn that Cocos Island became a national park in 1978, along with a 12 mile no-fishing zone surrounding the island. Marauding fisherman though, continued to decimate the shark population until the mid-80s when the permanent ranger stations were established. The ranger station at Wafer Bay had a 30'x40' shed completely filled with confiscated hooks, floats, and monofilament long line.

Nowadays poachers receive jail time as well as losing their gear. The shark population has rebounded nicely. The waters around Cocos are healthy these days; prey and predators are living in natural equilibrium.

Hopefully, this will be the status quo for years to come as people around the world realize how important pristine natural places are. They are the laboratories we use to determine how well the rest of our planet fares. One can not come to a place like this and not fail to think of the devastation that man has wrought around the globe in the name of progress. Perhaps we need another yardstick with which to measure the advance of civilization.

After 7 wonderful days of diving the wonders of Cocos with the MV Adventure, it is with heavy hearts that we commence our long ride back to the Costa Rican mainland. The liveaboard trip has touched all aboard with the sights and sounds of primordial nature, as well as a feeling, a feeling that we are all part of the greater whole. Life truly does flow within us and without us. We are at once insignificant and omnipotent. Our humility before nature may give us the wisdom to eventually be a better steward of the lands and waters of our little island in the cosmos.

This trip report was kindly provided to us by a customer, Don A. Grant. As such it is not an official Dive The World trip report, so it does not follow the same format or include the same information as an official trip report would. We also cannot guarantee the accuracy of it. However, Don asked us to share it with you and it is an interesting read. We hope you agree ...