On a recent trip to Egypt I had the opportunity to try out different types of diving tours. After a very successful liveaboard cruise in the Red Sea on Emperor Elite, I spent a few days sampling the diving in Hurghada at the numerous sites they have on offer there.

I was told the offshore locations were less crowded and far more interesting ventures than the shore dives in Hurghada. There seemed to be so much choice: wrecks, walls and drift dives. In waters alive with endemic marine life, large pelagics and stunning coral formations. Well, I was eager to see how good the Hurghada day trip diving really is ...

We got to visit the best and most famous site near Hurghada first - Erg Somaya. Most of the dive takes place between 15-25m, drifting over a reef plateau covered by vigorously healthy hard and soft corals. I was careful to avoid the edge of the reef which falls away sharply into a yawning abyss. This coral wonderland was made all the more intriguing with the appearance of the biggest moray eels that I have ever seen!

There are a few overhangs to explore, and this is where you will find groupers and lionfish congregating among the seawhips and fans. I was torn between gazing at the surging clouds of translucent glassfish that are unfortunate enough to be food for anything above them in the food chain, the blue spotted stingrays gently gliding up from the depths, and keeping an eye out for larger pelagics cruising in the blue above. 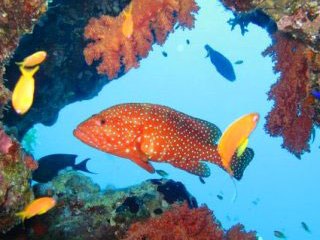 On the south eastern side of Small Giftun Island in Giftun National Park, strong currents sweep in nutrient-rich waters making this one of the spots in the area with the most marine life. Following our dive guides, we jumped into the water near the police station on the island to begin our recce as we drifted over the 2 plateaus decorated with magnificent coral formations. Descending the wall to between 20 and 35m you will find the biggest gorgonian seafans in the Hurghada diving area.

Shoals of barracudas swept passed us and I saw a few blue spotted stingrays. Even my safety stop yielded a terrific video of a turtle feeding on the coral.

A quick 10 minute trip and a short briefing gets you to the El Mina, commonly known as 'The Harbour Wreck'. Torpedoed by the Israelis in the 6 Day War of 1969, the wreck lies on its port side and the depth at the bow is about 25m, whereas the stern lies at about 32m. Because of the relatively deep profile here, dives tend to be limited to 30 minutes, which gives you more than enough time to explore the 70m long wreck.

You can clearly see the damage of the blast hole that caused her to sink and if you're adventurous this would be the point of entry for a closer inspection. Best be careful though if you need to use a finger to push yourself off the wreck as scorpionfish and lionfish are easily camouflaged on the coral lightly crusting the hull. Unless you want to end your dive with a 'bang' then also avoid touching down on the rock bed as there are rumoured to be live munitions strewn in among the debris.

El Fanadir is one of the longest dives we did in the Hurghada area. Starting out against the slight current, we headed due north for 30 minutes following the reef wall at 10m. This levelled off to a sandy bed before a drop-off descending to 25m. Then we turned around for a quicker trip back to the boat aided by the gentle current.

Along the way I was impressed by the loads of different reef fish as well as the colours and variety of corals and sponges on the wall. In comparison, the sandy floor at first seemed to be barren of life. I couldn't have been more mistaken! Upon closer inspection, an octopus was making a very good impression of an innocent rock, and torpedo rays would take shape out of nothing at all. On the smaller side, stonefish gave themselves away by gulping at seamoths.

I was happy to find that Emperor Divers apply the same professional service standards to their day trip operations as I had experienced on their liveaboard. Their SCUBA centre is just 5m from the jetty and the crew ensure your equipment is all carried aboard. The one drawback is that the boats don't have compressors on board and the tanks for the day are loaded onto the dive deck which can sometimes restrict the available space, but the inconvenience is not that dramatic.

The dive briefings are very thorough, and it is clear that safety is a high priority with the divemasters. Entry into the water is a giant stride from the dive platform and, after handing your fins up to the crew, the ladder makes it easy to get back on board to pick up a new tank for your next dive.

The time spent on board couldn't be more comfortable as most of the day boats are styled along similar lines as the safari boats in the Emperor Fleet. After a hot shower (although on the hot days I preferred a cold one!) to rinse off, you can relax on the sun deck or enjoy a meal in the saloon.

Lunch was served after our second dive of the day and was a very tasty, substantial buffet meal. There is lots of variety as they offer you between 3 and 5 dishes. I noticed that vegetarians and guests with special dietary requirements were also well catered for. As the temperatures can range up to 42°C in the Red Sea, the crew recommended we drink at least 3 litres of liquids a day and they helped us along by offering a plentiful supply of non-alcoholic drinks. 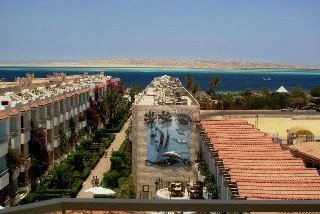 I was picked up by the Emperor Divers minibus in Marsa Ghalib for a 3 hour drive to Hurghada. This was because I had just come from a Red Sea liveaboard trip out of Marsa Alam. More commonly, divers will arrive on a 1 hour long flight with Egypt Air from Cairo. It's also possible to reach Hurghada via a direct flight of 5 hours or so from the UK or Europe.

I stayed at the Minamark Beach Resort Hotel

. The only thing that mattered to me was diving in the Red Sea, so this hotel was exactly what I was looking for: cheap and with reasonable service standards. It took me about 20 minutes to and from the dive centre each day. You can visit hotelscombined.com for more Hurghada accommodation choices

The briefings and overall service on the boat were outstanding and the transfers from the hotel to the dive centre and back ran smoothly, making a great start and end to a fulfilling day of scuba diving.

Even though I didn't see the sharks that I saw on my liveaboard cruise of the Southern Red Sea, I found the dives around Hurghada to be easily accessible and worthwhile. The coral, seafans and sponges are abundant and healthy; and the teeming marine life like barracuda and stingrays gave me more than enough to marvel at on every dive.

If you want to mix in a land tour of Egypt with some high quality scuba adventures, or if you only have a few days to spare, then Hurghada day trip diving with Emperor Divers will be an excellent choice.

... The website was fine. I can't think of any improvements. The best part of the service is your communication - very fast, very clear. You work with the client to find the right fit. I love working with Pip especially - friendly, prompt, and I trust her. ... -- Wendie Gibbons, Canada.  [More customer reviews]