I have just returned from a few glorious days diving in Thailand's Andaman Sea on board the MV Scuba Explorer liveaboard. I had been sitting on the sundeck one evening enjoying the sunset with a cool drink and chatting about the dives we had done that day. 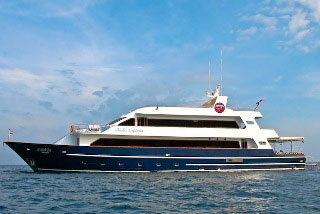 Firstly we had visited The Cathedral, another name for Koh Ha, experiencing the magical sensation of entering a cave and rising to the surface inside the cave to inspect the stalactites and listen to our excited echoing whispers.

Later the liveaboard went to Hin Muang where I had previously seen my first whale shark and had many manta moments. There were none on that day but instead we had great fun investigating the Purple Mountain surrounded by large tuna, schools of fusiliers, blue fin trevally and yellow snapper plus, one big meaty grouper.

Our third dive had been at Hin Daeng, another big underwater pinnacle meaning Red Rock, and the reason for its name is simply because this rock is covered by pink soft coral (but it looks red underwater). There was so much marine life here including small things like ghost pipefish, harlequin shrimps and nudibranchs. We also enjoyed spotting many giant moray eels and barracuda on what was a colourful, all-action dive. Not a bad day at the office!

When I got the e-mail from my boss about the liveaboard inspection trip I was so excited. Then when I reviewed the list of the boat that I have to go on, I just can't believe my luck. It said "Noon on Scuba Explorer to Hin Muang - Hin Daeng". I feel as if I got a bonus and win the lottery in the same time. I heard so much about this boat and I really want to know how does it look like from inside, because from outside it looks very impressive.

I have been working on various kinds of liveaboards in Phuket for over 6 years, from budget to luxury, but had never before been a customer myself. So this was a very interesting tour for me.

The best thing about this boat is the layout. It's a big boat with 4 decks, so we have a lot of space and its very comfortable. The sun deck is the top part which is huge and there are chairs to sit and enjoy the sun or watch the stars at night. The lounge deck is very comfortable and is where people are socialising, eating, briefing and relaxing. Also it is separated for non-smokers and smokers. 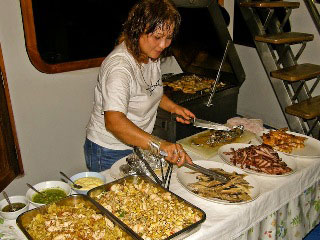 The main deck has a huge dive platform and the cabins: 5 deluxe cabins and 2 suites. I got the deluxe double bed which I was really satisfied with because it had a big bed. There are also lots of shelves to put my stuff on, a big mirror and a fridge with a few bottles of water in it. I had a chance to look at other deluxe rooms later on which are twin bed. They have pretty much the same set up except that the beds are a lot smaller. And of course the best cabins are the 2 suites which have huge space and lots of window.

The liveaboard's lower deck is where the standard rooms and the dive masters cabins are located. The standard rooms are smaller with less shelving and no fridge but somehow have a bigger bed (twin bed) than the deluxe.

This boat runs very smoothly throughout the tour. Even the night that we left Phuket, and it was a bit rough, I still found it very comfortable to sleep. The other good thing is the boat is very clean, especially the toilet. On this boat apart from the suites, the other cabins have to share 6 toilets but it didn't bother me at all. Every time I went in othere I never had to queue up.

Unusually there is no television in the lounge as other boats usually have, but there is a projector and screen instead. I find it very cool because the tour leader did his dive briefings here with the map on the screen and pictures of all the fish that we are going to see at each site. That was great. Also one guest brought new movies with him and shared them with us on the boat so it felt like we had our own cinema on the boat.

Another thing I liked about this boat is the music station. On this liveaboard you have speakers in your cabin. You can adjust the volume but can't choose your own music. They usually they play easy listening anyway.

Some of the non-smokers thought that they should have the open spaces to themselves without the smokers because, although they can sit in the lounge, if they wished to sit outside they might have to smell the smoke.

The sun deck is very big and clean and is very nice area to relax in but there is no shade so in the day time it's very difficult to go up there without burning yourself. A partial shade area would help.

The beds are a bit small for the taller of the Western-size guests although the cabins themselves are quite big. Though I really liked my cabin, other guests thought that they should be cleaned every day (they were in the suite and stayed for a 7 day trip), but apart from that they thought the room is great.

The most important thing for me and other guests who had a lot of scuba diving experience is that there is no nitrox on the boat. Our tour leader, Johnathan, said that they were thinking about it and there are plans to have it ready for next season.

Overall the food was considered to be very good. For the breakfast there is both Western, like ham, bacon, toast and fried eggs, and Asian like rice soup and noodles. The lunch was buffet style and mainly Thai food, which I found very tasty but not spicy. For dinner we enjoyed Western food like Spaghetti Bolognaise and Chicken Cordon Bleu. Between dives we were served snacks like banana fritters. 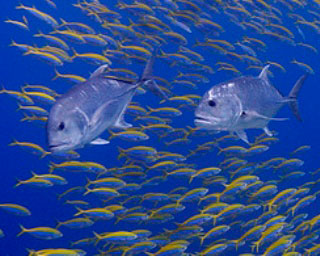 The diving system worked well and after each dive the staff take care of all the lifting and refilling. The briefings with projector were excellent. It is important to know that the fourth day dive is the last one of the day. You can have 1 more dive at night at about 7.30 pm but you have to pay extra THB 1,000 per dive, plus torch if required.

On Day 2 we had 2 really good dives at Phi Phi Island and 1 at Anemone Reef. Throughout the trip we had great visibility and all the guests were happy with the diving. Another bonus was that we were the only liveaboard boat in the area which does not happen very often, but it is more likely in the southern Thai Andaman than in the Similans.

The dive crew are very helpful and you hardly had to lift a thing on this boat. If I have to rate the service I would give 5 stars for the service of the crew - both dive and liveaboard crew. The dive guides give you a lot of knowledge of the marine life and I must say I love the briefing on the projector. It gave a lot of information and ideas about what to look for, and the log book page with the map on every site was very nice.

Historically the Scuba Explorer's regular customers were mostly Japanese but that is now changing and on this dive trip we had guests of various nationalities including British, South African, French, Thai and Japanese.

I recommend Scuba Explorer as a fine Hin Muang liveaboard diving option and also for the Similan Islands. All the guests I talked to thought that they get more than what they have paid for.

So if my boss asks me if I want to check out Scuba Explorer again next year ... I would say "yes" without thinking.