Shark Reef is a rather ordinary hard coral reef in Beqa Lagoon, just off the Viti Levu coast at Pacific Harbour, Fiji. However, you don't go scuba diving here to stare at pretty corals and nudibranchs. What makes this place special is that the reef has been protected from fishing boats within the Shark Reef Marine Reserve, and shark feeding has been taking place here for over a decade now. Shark encounters of one kind or another are guaranteed.

8 different types of shark frequent this reef. These being its famed bull (Zambezi) sharks, tawny nurse sharks, whitetip, blacktip and grey reef sharks, sicklefin lemon sharks, silvertips and the big bad monster of them all - tiger sharks. The diving staff chum this area of Viti Levu and within a few moments large schools of giant trevally, rainbow runners and red snappers are all around, splashing on the surface, fighting over the food. It's this noise, together with the fish scent that attracts the sharks.

Diving down with 4 guides and 2 huge sealed bins full of dead fish, you'll soon be overwhelmed by huge squalls of large pelagic fish and yellowtail fusiliers, scrambling over the dead tuna. Down to 30 metres you go, to take your seat a metre or so behind the 'arena' (a cleared patch on the sea floor), and behind a constructed 1 foot high coral wall. Now the action begins with hand feeding.

Soon the huge ball of snappers and trevallies are joined by grey reef sharks, perhaps half a dozen or so. Shy at first, they slowly circle ever-closer before taking food from the guide's hand. Behind you, white-tip and black tip reef sharks buzz back and forth, excitedly waiting their turn. Tawny nurse sharks cuddle up close to the feeder, as if trying to give him a kiss. If the arena suddenly clears, then you know you are about to get your first sight of a bull shark. The bull sharks that you dive with at Shark Reef are some of the biggest and heaviest you are ever likely to see. Thank goodness they are already well fed!

After an all too brief 15 minutes you start your ascent to the shallower 8 metre level to continue your dive. Now, swift moving and impressive silvertip sharks can pass by overhead in search of food. A full bodied shark (2½ - 3 metres), silvertips are often the stars of the show on most other scuba dives, but in Viti Levu they often play only bit(e) parts. Back in the shallows it's the turn for the black tips and white tips to have lunch. What a enthralling way to prolong your safety stop, watching a dozen reef sharks darting back and forth in the maelstrom.

The second dive at Shark Reef takes you down to 17 metres, and you stand behind a guide rope that acts as the new ringside. It is normally on this dive that tiger sharks make their appearance, and the food bins are left in the water during the surface interval to attract the tigers, which roam further away from the reef. Almost immediately you'll notice several more large bull sharks as well as hefty lemon sharks. Now more curious, they'll slowly come closer to within 4 or 5 metres. What a sight! The bull sharks would make any dive, but the main course may just be arriving!

Circling several times at first with stripes clearly visible, the tiger shark comes in. What a magnificent sight. The 4 metre tiger waiting for the feeder to hold out huge chunks of tuna like an expectant dog. You can clearly see its wide mouth and sets of teeth, just a couple of metres away, and its large eyes, closing up as it swallows the huge bait. Occasionally, the shark may miss the food and pass off. More urgently it will return, faster, straight in and over the audience's heads, so close you could smell its breath! What a thrill! Once again, your scuba time will vanish in no time at all, but you'll be left with memories of diving in Viti Levu to treasure for a life time. 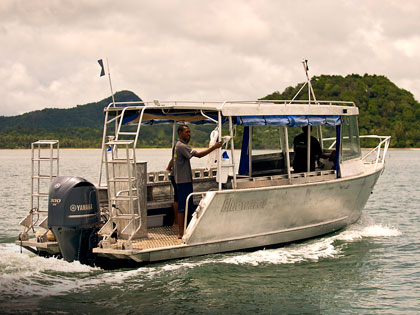