Your Guide to Diving in Thailand Newsletter

Whale shark sightings are common in Thailand, especially around the Andaman Sea and at Richelieu Rock. Numerous customers wander in asking us about the chances of coming across a whale shark around Phuket. The answer is very high, especially between the months of February and May every year. 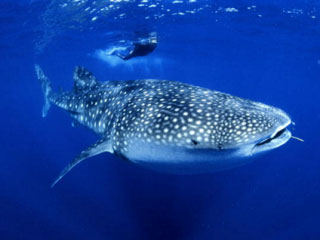 While some people are intimidated by its size, the whale shark is actually a gentle giant keen to avoid confrontations and generally trusting of humans. As for whale shark etiquette, it is said that passive interaction is the best policy. In fact, aggressive behaviour can drive them away - so no touching, or swimming after them if you're hoping for one to hang around you. They can be quite friendly. One of our satisfied customers said it had distinctly more mammalian than fishy behaviour.

Unfortunately, the planet's largest fish is on the verge of extinction. In Taiwan, documented whale shark catches have declined by 50 to 80% from the mid-1980's to 1990's. In Gujarat, India, 160 whale sharks were landed between January and May 2000 compared to 279 within the same time the previous year. In Thailand, whale shark sightings have also declined significantly.

Why is this so, you might wonder? Well, whale sharks are extremely vulnerable to over exploitation by man for several reasons. They have a slow growth rate, only reaching maturity at around 30 years old and living as long as 60 - 100 years. Their reproduction rate is also very slow - long intervals between pregnancies and producing around a few hundred pups at one time. Quite simply, the whale shark cannot populate fast enough to keep up with man's consumption.

Whale shark meat and fins are considered gourmet cuisine in some Asian markets where a single fin can fetch up to US$10,000. A restaurant in Beijing once sold 3 whale shark fins for over US$72,000 in November 1999.

A number of non-profit organisations have been campaigning tirelessly to protect the world's largest animal from overexploitation and the very real threat of extinction. Some of them are Wildaid, the U.N. Convention on International Trade in Endangered Species (CITES), and in Thailand, the Save The Whale shark for the Thai Seas Conservation Club.

Considered the biggest fish in the world, the whale shark is a cold blooded cartilaginous fish like any shark. It breathes through gills. Tails are vertical and move from one side to another, unlike other warm-blood animals (mammals) which have parallel tails and breathe through lungs like the whale, dolphin and dugong.

These plankton eaters are known as harmless fish as they don't present a threat to either man or fish school around them. They can grow up to 12m in length, although there are questionable, unconfirmed sightings of specimens up to 18m in length. They can generally be found in the entire Indian Ocean between in depths of up to 130 metres.

The whale shark is easily recognized by its immense size and a 2-tone pattern of lights spots and lines on a dark brown dorsal surface. Unlike that of most other sharks its enormous mouth is terminal in position and can be opened wide to filter large amounts of water for small fish, squid, crustaceans, and other plankton organisms.

Not much is known about the habits of these animals. Young whale sharks live in small groups, but are rarely seen. Adults tend to be solitary and nothing is known about how they find each other or where they mate.

Whale shark encounters are virtually guaranteed in several parts of the world at the right season - namely, off the Seychelles, Thailand - Richelieu Rock and Hin Daeng, Christmas Island, Mozambique and Western Australia.

Click for your shortlist of Whale Shark dive options