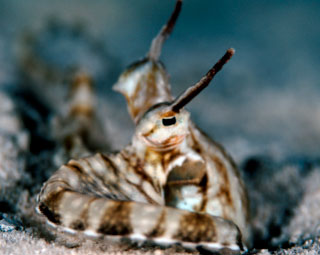 Photographs of mimic octopuses are rare and highly-prized trophies as they can and often are mistaken for something else, and they can only be found when you're scuba diving in the eastern parts of South East Asia.

These interesting creatures change their shape, colour and even skin texture, seemingly in order to elude predators. But are they really masters of disguise, or are scuba divers assigning them more skill in the art of deception than they actually possess?

Their survival could possibly depend on being able to convincingly depict a venomous sea creature. So let's find out a little more about these small animals that have such a talent to hold our rapt attention.

Mimic octopuses have much in common with their octopus cousins: a mantle, which houses internal organs and 3 hearts, 8 legs and a siphon which propels them at high speed. They can both taste and feel potential food with the suckers on their tentacles which grow up to 25 cm.

Their relatively small bodies (60 cm) are brown with white stripes or spots. Unlike the wonderpus, the mimic octopus's white markings fade so that the overall colour is light brown when they feel unthreatened. They are able to change their colour and designs almost instantaneously by expertly orchestrating the opening and closing of the chromatophores, which are pigment sacs on their skin.

Mimics feed on small fish and crustaceans. They either camouflage themselves to merge into the background and lie in wait, or actively hunt for their prey in the silty sea bed using their pencil-thin tentacles to probe crevices and holes to seek out and capture their next meal.

Mimic octopuses don't need to worry about being type-cast as they seem to have the ability to take on numerous roles. Some disguises need a little imagination for the human eye to see the likeness. But as their shape tends to change according to the situation that arises, the intended audience is most likely to be convinced. 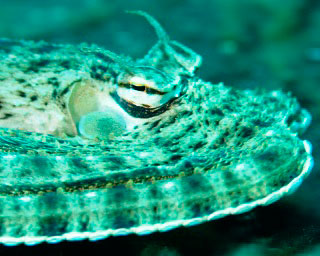 For example they are said to imitate a potential mate for giant crabs, only to set a trap that foils any chance of romance when the giant crab is attacked and gobbled up. Mimics can be hunted by damselfish and studies have reported seeing them disguise themselves as a damsel fish predator. By hiding everything under the sand except its eyes and 2 arms decorated in white and black bands, the mimic octopus seems to convince the damsel fish it is a poisonous banded sea snake, even if we are not as easily fooled.

Most of their imitations are of poisonous critters. They give a very believable flatfish imitation by flattening their mantle, tapering their legs then flowing with the curves in the ocean bed as they rapidly swim out of harm’s way.

The act of reproducing new life spells the end of the parent's lives. After depositing sperm into a cavity in the female's mantle, the male's ability to reproduce is terminated when the tentacle designed for this purpose falls off and he dies shortly afterwards. Differing from other octopus species, the female mimic continues to forage and eat while carrying the fertilised egg strands with her.

Despite being able to maintain her strength during the incubation, the female also dies shortly after her eggs hatch. The defenceless larval octopuses then join the plankton bloom to feed and be consumed in turn. The surviving octopuses return to the sandy sea floor to begin their own life of mimicry.

As a non-venomous invertebrate, the mimic octopus is fair game for any fish that can see through its mimicry, including barracuda, sharks and even the smaller hunting fish. Humans also catch octopuses for consumption.

Mimic octopuses are a relatively new discovery and there is no data to establish whether their numbers are declining or increasing at this stage. Those that live in river mouths have the risk of being exposed to harmful toxins and effluent, but then again, they do seem to thrive in estuarine conditions.

These octopus like living in the silt and mud on the floor of estuaries, volcanic sand sea beds and shallow water not more than 15m deep. This doesn't offer much chance for escaping from danger. Either these critters are very courageous or very self assured in their ability to fool predators, because they hunt during the day.

They are mostly found in Lembeh Strait, Indonesia and Lankayan in Malaysia. However, muck diving is a new obsession with divers and as it takes place in their preferred environment, there is a possibility that more mimic octopuses exist elsewhere in the world that haven't been found yet.