Scorpionfish are widely dispersed across some of the globe's best diving locations, yet you may need the expertise of your local divemaster to spot one, unless you touch their venomous spines. Scuba diving with scorpionfish is not a hands-on experience!

Scorpaenidae (scorpionfish) are part of the order Scorpaeniformes. This is a large extended predatory family of strange looking and extremely toxic marine (mostly) fishes. 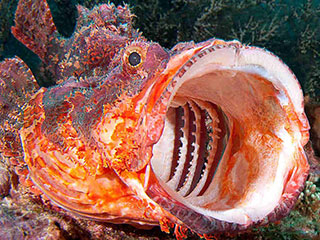 It is easy to make mistakes when trying to identify different species when diving with scorpionfish. Even the ‘fish authorities’ are undecided on how the family fits together. 'Fishes of the World' recognises almost 400 species and 10 subfamilies, and Fishbase lists a much lower 172 species and 3 subfamilies. They do all agree that the flamboyant lionfish, deadly stonefish, well camouflaged leaffish are all cousins of the scorpionfish.

Scorpionfish vary in length, between 14-45 cm, have large uneven, spiny heads and compacted bodies, have well developed pectoral fins and come in a variety of colours to suit their habitat.

Camouflage is key to the survival of this sedentary species. Generally this means blending in with the surroundings, whether this is in murky mud or being unnoticeable among Pocillopora spp. corals. 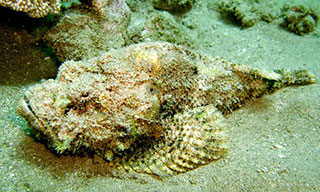 Their colouration includes a dull yellow, grey, brown or rust, with some light blotches. Yet they also exhibit bright colour warnings that are typical of many highly venomous creatures.

Living a lifestyle akin to a couch potato enables algae or other pests to take up residence on these fish. In order to rid themselves of any attached algae, cyanobacteria and even parasites, they have the ability to shed the outermost skin layer, the cuticle.

All Scorpaenids are equipped with a large mouth, capable of swallowing prey over half their own body length! They are nocturnal carnivores and prey on crustaceans, cephalopods (such as squid, octopus and cuttlefish) and other small fish. They rely on their camouflage and their 'hoover' like ability to literally inhale their unsuspecting meal in an instant. 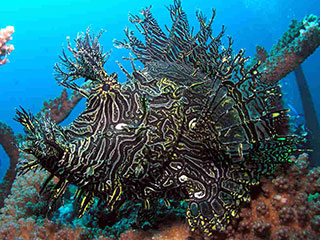 Their mating dance includes non-destructive fin nipping, gill cover flaring and side-to side rocking. The female releases between 2,000 - 15,000 eggs that are fertilised by the male before they float to the surface in the greenish gelatinous walls of hollow pear-shaped sacks that sort of look like balloons. The eggs hatch after just 5 days and the fry remain at the surface together with plankton until they are about 2.5 cm long.

They then make their way down to the safety of the reef. In captivity they have an average lifespan of 10-15 years, however in the wild this would be significantly lower.

Once the young have successfully survived their juvenile days, scorpionfish have few predators. Who would want to snack on a spikey venomous bony fish anyway?

Many scorpionfish have the ability to effectively display their different colours, using a behaviour to deter predators called "flashing", when they expose the usually concealed colours.

Scorpaenidae are found across vast areas of the Indo-Pacific. They are highly adaptable and live in the colder regions of the world's oceans, in temperate and tropical waters, as well as in brackish and even freshwater.

They are generally found in shallower waters, however in July 2016 a new species was found way beyond diving depths off the Caribbean island of Curaçao. The new species can be found between 95-160m and was officially named Scorpaenodes barrybrowni in honour of Substation Curaçao and freelance photographer Barry Brown.

Habitat loss from dying reefs, as a result coral bleaching and ocean acidification are the main ecological dangers facing all reef dwellers, including scorpionfish. Destructive fishing practices also contribute to such habitat loss. Although tricky to handle and voracious predators, scorpionfish are quite popular among aquarium owners.

... Dive The World is very informative and easy to deal with. Quick response on emails. I am happy with everything ... -- Alexy Seleznev, Russia.  [More customer reviews]