Mu Koh Surin National Park is situated in the Andaman Sea approximately 60 km from the coast of Phang-Nga Province in the southern Thai peninsula region. The park covers an area of approximately 135 km². Of the protected area, 102 km² or 76% is sea. 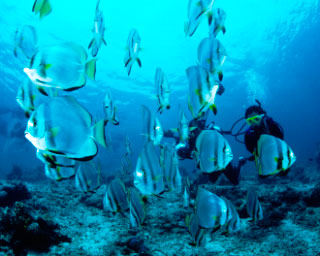 The park comprises 5 main islands: Koh Surin Nua, Koh Surin Tai, Koh Ree (or Koh Satok), Koh Glang (or Koh Pachumba) and Koh Khai (or Koh Torinla). Surin Nua and Surin Tai are the larger islands and are situated on a north-south axis. A few kilometres to the north of the park is the Myanmar border and about 100 kilometres to the south is Mu Koh Similan National Park.

The main attraction for most visitors to the Surin Islands is the fact that it is an unspoiled tropical paradise far from the mainland, with healthy forested islands, surrounded by clean water and a profusion of coral reef species. The coral reefs are the best, most diverse coral reefs accessible to snorkellers, as they are generally shallow and so scuba equipment is not required. The islands also attract great research interest, and many scientists visit the islands each year for a variety of reasons, ranging from coral reef surveys to bird observation.

Around the Surin Islands

The 2 large islands of North and South Surin are located very close to each other. They are separated by 200 metres of shallow sea which can be walked across at low tide. The other 3 islands are rock islands with some dwarf trees and rainforest plants. The islands are surrounded by one of the biggest and most fertile shallow coral reefs in Thailand.

The park is reached by boat from Kuraburi in Phang Nga Province. A private tour boat departs from Kuraburi Port at 09.00 am everyday and arrives at the park headquarters, northern Mu Koh Surin at 11.30 am. From the port to this island, it's about 60 kilometres which takes about 2.30 hours journey time. The return boat from Mu Koh Surin to Khuraburi Port departs at 13.00 am everyday. This service is closed from May 16 to 15 November every year during the rainy season. Some dive boats from Phuket and Khao Lak also dive these islands as part of a Similan/Surin liveaboard safari.

A visitor centre is located at Chong Khat Bay on North Surin Island where there is also a small restaurant, some basic bungalows, restroom facilities and a first aid centre. Camping is possible at Mai Ngam Bay of North Surin.

The clear and unpolluted seas around the islands are home to healthy populations of hard and soft corals, starfish, feather stars, lobsters, clams, anemones, crabs, sea pens and a rich diversity of fish including parrotfish, damselfish, triggerfish, lionfish, angelfish, batfish, grouper and reef sharks to name just a few. Whale sharks and whales are occasional visitors to the area. 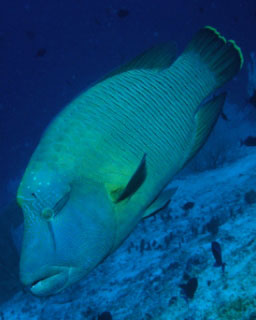 There are 3 types of giant clams found on the fringing reefs of the area. They are Tridacna Maxima, Tridacna Scuamosa and Tridacna Crocea. A 1999 UNESCO funded survey found the area suitable for a spawning project to increase the number of clams in the area. The same survey team also found 29 species of edible invertebrates including jellyfish, crabs, bivalves, polychates and cephalopods. Sea cucumber numbers were found to be far lower than in a similar 1994 survey due to over fishing by the Moken fishermen for sale and barter. Sea cucumbers were recommended for total protection to allow stocks to recover naturally.

Sea turtles still nest on the Surin Islands, with 2 species coming ashore to lay their eggs, Hawksbill and Green turtles. In the early 1990s a few of the rare Olive Ridley turtles also nested there. Hawksbill turtles are most common and Mu Koh Surin is arguably the best place in Thailand for swimming with sea turtles. Protecting the turtles nesting sites is one of the parks main responsibilities. For more information see our: Koh Surin dive sites.

In a survey of bird species a total of 91 types of birds were found. Local birds account for 57 types with the others being migrating birds, such as the Little Heron, Common Sandpiper and Little Tern.

22 types of mammal have been recorded including 12 types of bats such as the Island Flying Fox and the Black-Bearded Tomb Bat. Pig-Tailed Macaque and Common Wild Pig are also present.

There are 6 types of reptile including Indian or Bengal Monitor, Water Monitor, Skink and Reticulated Python.

Primary rainforest covers most of the park. Plants found here include Diospyros malabarica Kostel. Beach forest is found in beach areas, with plants such as Barringtonia, Cerbera odollam. Mangrove forest is found in the mud areas and the brackish water of Mae Yai Bay. Plants found here include Rhizophora apiculata, Rhizophora mucronata and Xylocarpus granatum.

There are 2 seasons, one hot and dry from November to mid May, the other hot and wet from mid May until October. The yearly average rainfall is more than 3,000 millimetres and the average humidity is 83 percent. The hottest months are April and May. In rainy season, the national park closes from 16 May - 15 November when boat travel to the park can be hazardous.

Surin was granted national park status on 9 July 1981 when it became the 29th national park of Thailand. Prior to that there had been much debate about it's future. For years the area was of little interest to anyone except for fishing boats sheltering from storms, and small communities of sea gypsies.

However in December 1971 the National Committee on Wild Animal Reservation and Protection suggested that the islands should become a wildlife sanctuary. That idea was dropped when it was realised that the islands were located within the exploratory area leased to a petroleum company. It was then proposed to develop the islands as a Vietnamese refugee camp. This idea was rejected because the relocation and support of so many people in such a fragile environment would soon result in damage to the islands pristine land and marine habitats. The Royal Forest Department opposed the development of the islands because it appreciated the islands unique nature and their tourist and research potential. They instead proposed the establishment of a national park to protect the area. 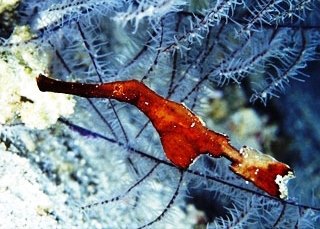 The islands are home for a community of sea gypsies. The sea gypsies, or Moken, are a nomadic sea people who live in the Burmese Mergui Archipelago. Their ancestors came from Indonesia. The name Moken is from their own language, which is universal to all sea gypsy groups. The Moken do not have a written language and are mostly illiterate, but some are good at other languages including Thai and Yawi Malaysian. There is now a small 1 room, elementary school on the islands, but for children to continue their education further they must move away from their communities to the mainland.

The Moken live a very primitive existence and as such have a great respect for nature and the environment. They rely upon their environment for food, clothing and for their materials for boat construction. They live by spear fishing and collecting shellfish. Being nomadic they spend a lot of their time travelling, but they avoid travel during the monsoon season from May to November. During this time they moor their boats in a sheltered location to form a temporary village of several families. These villages then break up when they start traveling again in December until April. Every year during April an important ceremony occurs on Surin and sea gypsies from far away come to attend. They often come from Myanmar and the islands of peninsula Thailand and Malaysia. The festival is called Loi Reua and involves ancestor worship and the asking the spirits to care for and protect the sea gypsies.

The Moken lifestyle can come into conflict with national park authority. The Moken fish to feed themselves and to sell at markets in order to buy rice. But their subsistence marine trade has been restricted by the park authorities. The UNESCO supported Andaman Sea Pilot Project aims to bridge the cultural and communication gap between the park authorities and the Moken, so that the management of the protected area takes into consideration the physical and cultural needs of indigenous people as well as encourages sustainable living through their traditional ecological knowledge and stewardship.

In 1987 the Moken were granted the right to collect sea shells to sell to tourists, despite national park regulations preventing the collection of shells. In 1996 shell collecting by the Moken was banned by the park authorities. To compensate, the park now accepts donations from visitors which it uses to buy rice and other necessities for the Moken. The Moken are not supported by the Thai government because they are not strictly Thai citizens and have no ID cards (even the ones who marry Thais). The Thai government does not even accept the existence of indigenous people in Thailand so the Moken are effectively landless and stateless.

Some Mokens are hired as staff by the Surin national park authority to work as boatmen, gardeners and garbage collectors. This reduces their need to forage for marine life to earn an income. However, some Moken do break park regulations in order to fish and provide for their families. In order to work longer and harder, some of the Moken men use artificial stimulants which are addictive and ultimately kill them. Many Moken men have died as a result of drug and alcohol addiction, which has left an in-balance between the number of men and women in their community, putting an added burden on the women to support their families. Punishment for breaking park rules is unclear. It can range from verbal warnings to boat confiscation, but this just deprives the Moken of their ability to earn a living.

... Very good - this is our 4th trip with Dive The World and the service is always excellent. We love Beef and his customer service ... -- Mary Sue Rogers, Australia.  [More customer reviews]