With a big set of sharp teeth, barracuda are often considered vicious predators. Yet the question remains: are they in fact quite as dangerous as their reputation suggests? Well, in spite of their appearance and success as a predator, confirmed reports of attacks on human beings are exceptionally rare. 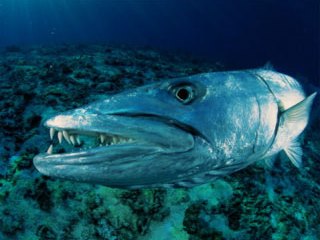 Barracudas are one creature that non divers seem to fear but those more familiar with the marine world long to encounter these sleek and rather rather daunting fish. In truth, this creature is more of a photographic model than a marine terror.

Divers daydream about finding themselves in the middle of a swirling tornado of barracudas as they circle round and round in a vortex. Such a moment often represents one of the more memorable entries in lucky divers' log-books and diving memories. So, cast aside the myths about the brutal barracuda and get to know this allegedly fearsome and undoubtedly fascinating sea creature.

Barracudas are from the genus Sphyraena, meaning 'pike-like' fish in Latin. Their bodies are highly developed and efficient, adapted perfectly to be a top predator of the sea, elongated and slim, ideal for sneaking through the reefs during a hunt. Their large mouths house a pair of very powerful jaws. The lower jaw protrudes a little and their unequal fang-like teeth have earned them the moniker 'Tiger of the Sea'.

Among their other distinguishing features are 2 separated dorsal fins and a forked tail fin which is key in making them fast swimmers. As with most fish, barracudas lack eyelids. If you happen to see a barracuda moving in a very slow fashion, it may be that they are in fact sleeping. When asleep they remain alert for danger. It would be unadvisable to approach in such a situation since if disturbed from their sleep they may respond aggressively to any rude awakening.

The coloration of barracudas is normally grey or silver on the upper surface becoming white on the belly area with white tips on their caudal fins. Size varies according to species.

Throughout the world, there are some 26 species. Commonly divers encounter more than 1 species at a single dive site, so it is worth being able to tell the difference between the species.

In order to identify the great barracuda (Sphyraena barracuda), look out for black spots on the lower sides of the body. In addition, there are normally 18 to 25 dark stripes along the barracuda's upper side. Its tail also has a pair of dark stripes, 1 each on the upper and lower fins. The great barracuda is the largest in the genus, around 1.5 metres in length but it may grow to as much as 1.8 metres and weigh in at up to 50 kg. It is a widely distributed creature, being found in the Pacific, east and west Atlantic, Caribbean Sea and Indian Ocean.

One you are likely to encounter when diving in places like the Maldives or Bali's Lembongan Island is the blacktail or chevron barracuda (Sphyraena genie), whose name comes from its body's obvious chevron markings. Another distinguishing feature is the blackish caudal fins of the chevron barracuda. At Broken Rock in the Maldives, you stand a good chance of looking up through the middle of a swirling vortex of this species, definitely a highlight of your Maldives dive experience. This species is found throughout the entire Indo-Pacific region.

The pickhandle barracuda (Sphyraena jello) is a closely related species of the great barracuda, distinguishable by dark marks on its body with resemble pickaxe handles. Most of its caudal fin is slightly yellow unlike the chevron barracuda and it grows to some 1.5 metres in length. These are also distributed throughout the Indo-West Pacific.

One other common species is the yellowtail barracuda (Sphyraena flavicauda), which has yellow caudal fins and a pair of brownish yellow bars. This is one of the smallest barracudas which grows no more than around 60 cm. Yellowtail barracudas are commonly found in the Indo-West Pacific region. 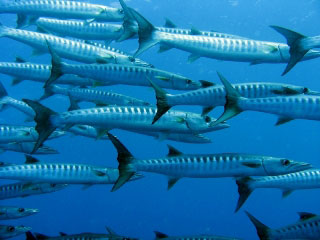 In general, mature barracudas are considered solitary creatures when hunting. Juveniles tend to congregate in large schools, occasionally in the hundreds or even thousands. The act of schooling lends juveniles protection from predators in that it allows a degree of safety in numbers.

In the event of a predator attacking a school of barracuda, the school would assume the shape a confusing tornado, preventing the predator from fixing its sights on any single target. For the purposes of hunting, the multiple eyes of the school usually work together to locate food. Although large numbers mean less food per capita, the system in fact benefits the individuals in terms of finding food and protection from predators.

Barracudas tend to associate with other fishes like rainbow runners, bar jacks and big eye trevally (normally associated with chevron barracuda). It seems that barracuda are also very keen on associating with cleaner wrasses to ensure well maintained skin.

Larger species like the great barracuda are not found in schools but prefer the solitary life.

Due to their keen eyesight and strong jaws, barracudas are near to the top of the food chain. Always the opportunists, barracudas may camouflage themselves near sea grass in order to ambush prey, and they can move swiftly (over 40 km/h) when hunting through coral reefs. When they attack they do so with a single deadly bite.

They do not tend to be fussy eaters and dine on smaller fishes such as mullets, bream, snapper and grunts. They can also attack larger fish since their jaws allow them to chop the bigger fish in half. Ultimately anything edible may be fair game and end up in the belly of a barracuda.

Cannibalism is also part of barracudas' diet. Juvenile barracudas often fall prey to many different types of predators, including their own kind. When mature, only predators like dolphins, giant tuna and sharks would be strong and capable of hunting barracudas.

They are often said to attack metallic, reflective objects which might resemble little silver fishes that they commonly eat, therefore divers may be wise to avoid wearing shiny earrings in their presence if they would rather avoid being mistaken for a tasty treat.

There is not a great deal of information regarding the spawning process. It is generally believed to occur some time between the months of April and September. The females will spawn a few times, releasing somewhere between 5,000 to 300,000 eggs on each spawning. The fertilised eggs float in open water until hatching.

Not long after hatching, the larvae settles in areas where vegetation offers both food and protection for about a year, until the point where they have grown into juveniles. As they progress into adulthood they will move to deeper waters in areas of reef where they will remain for the rest of their lives.

Males mature sexually at around 3 years of age while females take about 4 years to reach sexual maturity. It is not possible to differentiate between the genders of barracuda purely from an external examination.

The age of a barracuda, which can be up to 14 years, can be estimated by counting the rings in its scales (1 per year), also found in a small structure called an Otolith in the barracuda's ear.

In addition to those predators listed above, humans perhaps present the most danger to barracudas. Among the greatest concerns are habitat destruction, pollution and climate change and to a lesser extent, 'sport' fishing. Considered a game species, barracuda are much sought after due to the aggressive fight that they provide when hooked. Unfortunately, fishermen's technique of catch and release (banned in some countries) usually results in a large number of mortalities among the species which are very sensitive creatures.

Due to their strong flavour, barracuda are often compared to tuna and salmon and are eaten either as a fillet or steak, smoked, or as an ingredient in soup. However there exist some scientific reports which indicate that their flesh contains dangerous levels of mercury and cadmium as well as having been linked to the ciguatera poisoning. Ciguatera is a type of food poisoning. Toxins from various species of algae, are eaten by fish and it builds up within their bodies. When hunted by predators, including barracuda, the toxins become more concentrated. Ciguatera poisoning affects humans upon direct consumption of barracuda meat. This seems to be leading to a decline in demand which might ultimately be good news for the species.

Barracudas are residents of tropical and subtropical waters. They are commonly found in the Pacific Ocean (Fiji, Malaysia and Indonesia), Indian Ocean (the Maldives, Thailand and Burma), the Caribbean and throughout various regions of the Atlantic Ocean. They inhabit shallow waters with reefs, mangroves and sea grass, as well as the open sea.

Some of the best destinations to dive with barracuda are Sipadan Island in Malaysia, the Banda Islands in Indonesia, the Koro Sea in Fiji and the Maldives.