In the world of scuba, a magical transformation occurs as the sun sets. The beautiful daytime reef undergoes a metamorphosis. It's as if strange alien creatures emerge and the reef moves to a totally different beat as the stars appear. 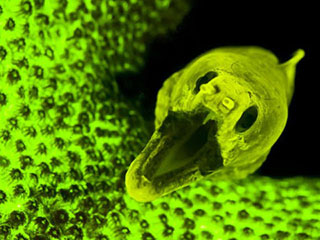 For a whole new perspective, you can view the performance through a yellow mask filter, while the actors and props are illuminated with specialised blue light! See the reef theatre transform, before your very eyes, into a trippy, psychedelic disco as you enter this new and surreal world.

Do you want to see what some species can see without this help? Do you want to experience a dive 'trip' without the narcotics? Interested? Let us introduce you to fluorescent (fluo or glow) night diving.

How to go with the fluo?

In terms of specialist diving, nothing could be easier or more breathtaking. All you need is to book a liveaboard or resort dive trip that offers fluo diving and have...

If you wish to capture this phantasmagorical experience, ensure you also have the correct filters for your camera gear.

Fluorescent night diving groups are usually quite small. Generally a buddy pair with a divemaster or maximum of 2 pairs per group. It is recommended that you have a fair bit of night diving experience before joining a fluo dive. 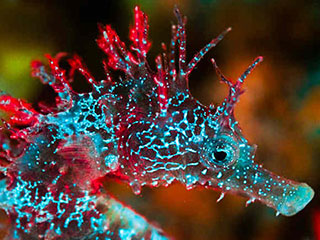 If you're at the right dive site, you can experience all the wonders that fluo has to offer in as little as 2-10 metres, however you could initially feel disorientated.

Due to the yellow filter in the mask (blue barrier filter), the emission light you see is dim and can not light up large sections of reef, as the filter eliminates the only other light source. This could cause disorientation and even damage to the reef if you accidentally bump into coral that does not fluoresce.

Creatures like moray eels and seahorses reveal themselves in previously unseen ways that will leave you breathless.

You should always approach and depart your dive site using your backup white-light torch and use it in areas where there is little fluo activity. Ensure your navigation skills are up to speed, your buoyancy control is perfect and keep a regular check on your compass.

Want to know more about fluorescence?

Bio-fluorescence, bio-luminescence and phosphorescence, what does it all mean and how do they differ?

Phosphorescence: The organism emits light after the source has been removed. How does this occur? Sunlight 'charges' the organism and the energy is used in their metabolism. A portion of the stored energy is converted to light and the organism glows in the dark. It is quiet common, one example is floating algae masses.

Bioluminescence: This is a form of chemiluminescence. A chemical reaction takes place inside the organism that creates the light. Bioluminescence is found in many marine organisms: plankton, jellyfish, algae, sea stars, worms, crustaceans and some fish and sharks, to name a few. In some cases animals ingest bacteria or other bioluminescent creatures that make them light up.

Fluorescence: Biofluoresence is when fluorescent proteins in an organism absorb light of a specific wavelength and re-emit that light at a lower energy. The neon colours are in part the response of light shining on them and can only be seen for a short duration. They are responding to a low-frequency range and low intensity. This causes light to be a different colour when re-emitted. If some organisms remain in the dark during your fluorescent night dive, it means they do not process these proteins. Those that contain them will glow in the dark, appearing as neon yellow, oranges, reds, blues or greens.

How was fluorescence discovered and what do we know about it? 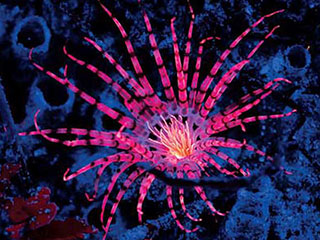 The concept of marine fluorescence was first proposed by Charles Phillips back in 1927. Phillips observed bright green sea anemones in a tidal pool in Torbay, Devon. He examined samples in his lab using a lamp and a Wood's glass. A filter that only lets ultraviolet light through, which turns visible light into ultaviolet light. In this way he proved that they were fluorescent. He encouraged marine biologists to use this kind of light in their research, unfortunately his keen insight was not accepted.

In the '50s National Geographic photographer, Luis Marden, noticed a red anemone at 18m (a depth where red light is filtered out) and concluded that its colour was due to fluorescence. Dr Charles Mazel began his underwater fluorescence research in the 1970s. His most significant finding was that ultraviolet light was not the best wavelength for viewing fluorescence; blue light, with wavelengths between 450-470nm was 4 times more effective in stimulating fluorescence in particular corals compared to UV light at the same energy. He then developed the modern equipment for fluorescent night diving; using blue light torches and yellow mask filters.

Fluorescence is found in a variety of marine life. These include corals, fish, barnacles, sponges, anemones, jellyfish, clams, nudibranchs, cephalopods, shrimp and crabs. It is hypothesised that as this phenomenon is spread across a range of species it therefore must provide some benefit to the animals. Exactly what this is, is yet to be confirmed. One theory is that it acts like sort of a sunscreen for corals in shallow, warm water. Another theory is that it is used as a form of interspecies communication. This is a relatively new field of study and is becoming a thriving research area in many marine organisations and universities.

Is there a practical application for the fluorescence phenomenon?

There is no denying that fluo diving is a spectacular visual experience, however it offers so much more. Fluorescent night diving has become an indispensable tool for coral-health research and coral-propagation census analysis. Dead corals will not fluoresce and areas with algae overgrowth will fluoresce red. Research has shown that corals under stress fluoresce less. New colonies of corals are usually tiny, transparent and incredibly difficult to spot, however under blue light they shine like beacons. The presence, or lack thereof, of new corals is a key indicator of the health of the reef.

Convinced that this is your next dive experience? Let us assist you in making it a reality. As fluorescent night diving increases in popularity, more and more operators will offer it as a matter of course. Here is a list of operators at the time of writing with whom you can delve into the psychedelic world of fluorescence.