Scuba Your Guide to Diving in Costa Rica

The park is located in the Pacific Ocean, 330 miles (535 km) southwest of Cabo Blanco in Costa Rica. It covers 9 miles² (24 km²) of land and 760 miles² (1,977 km²) of ocean. It has a winding coastline, a dense, wet and evergreen interior, with tall coastal cliffs up to 590ft (180m) high and waterfalls that cascade directly into the sea. It is without doubt the best place for scuba diving in Costa Rica and has approximately 20 dive sites, many of which are truly world class.

Cocos Island National Park was created in 1978, in 1988 it was declared a UNESCO World Heritage Site, and in 2002 a National Cultural and Historical Treasure.

Although no fishing or taking of sea life is allowed within 14 miles (22 km) of the island, a lack of enforcement meant that illegal commercial fishing and shark-finning occurred in the waters until 1992. Since then, park wardens have been stationed permanently on the island and shark numbers have noticeably increased again despite illegal fishing remaining a serious problem.

Dramatically on 3 March 2011, Costa Rican president Laura Chinchilla Miranda signed an executive decree for a new protected area called the 'Seamounts Marine Management Area' which will be 5 times larger than the existing park.

It is estimated that the geological age of the island is between 1.9-2.4 million years old. It is the only part of the Cocos Tectonic Plate that emerged from a volcanic formation almost 2 miles (3,000m) deep, and belongs to the volcanic chain that extends from the Galapagos Islands to the Mesoamerican trench in southeast Costa Rica.

The island was originally discovered in 1526 by Spanish explorer Joan Cabezas del Grado but remained a rest stop, refuge and storage area for the pirates and corsairs that sailed the western coast of the Spanish Americas.

In 1793, Cocos began to be visited by whaling boats, which landed on the shores to stock up with fresh water and coconuts. Pigs, goats and various plants were left on the island in order that they provide food for future travelers to the island.

The first recorded involvement of Costa Rica with the island was in 1832, when the government rescued a Chilean ship that was wrecked in Wafer Bay. Finally, the Costa Rican flag flew over the island in 1969, when the Jesús Jiménez Amora administration took legal possession of Cocos.

Nowadays, the majority of visitors are scuba divers that come to the island on liveaboard boats to marvel at the extraordinary marine life surrounding the island. 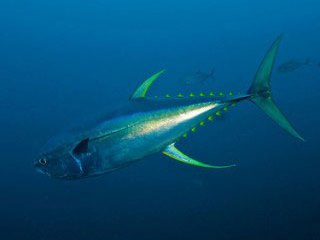 The climatic and oceanic characteristics, combined with its splendid isolation, have led Cocos Island to a high degree of endemism for such a small area of land.

More than 250 fish species are found here, and many large pelagic fish frequent the area, including the Galapagos shark, scalloped hammerhead, manta ray, tiger shark, yellowfin tuna, mackerel and marlin. 600 mollusk species have been identified, 7% of which are endemic; 57 crustaceans and 32 coral species.

Most of the Cocos fish species are found only in the eastern tropical Pacific. There is a striking resemblance between many of the fish of this region and those in the Caribbean/western Atlantic. It is thought that this is probably caused by the closing of the Isthmus of Panama some 3-3.5 million years ago.

The eastern tropical Pacific has a low number of reef building coral species. It is likely that Cocos is fed its coral larvae by the North Equatorial Counter Current from the Line Islands, north of the Cook Islands, some 3,100 miles (5,000 km) to the west in the central Pacific. However, the El Niño of 1982-3 devastated the coral at the island, wiping out some species entirely, and it is yet to recover to its previous state.

At the island, there are 5 freshwater fish species, including 3 endemics - Cocos gudgeon, Cocos clingfish and the spotted sleeper. There are also 5 reptile species found here, 3 being turtles and 2 being endemics - the Cocos gecko and the Cocos anolis. 400 insect and 5 anthropod species have been recorded (76 endemic); plus 100 bird species, 13 being residents and 3 endemic - the Cocos mosquito, Cocos cuckoo and Cocos finch.

Of the 235 plant species on the island, 60 are endemic including the iron tree, the guarumo tree and the coconut palm.

There are now also 6 mammal species living on Cocos Island, erroneously introduced some 250 years ago - the wild pig, domestic goat, 2 rat species, the house cat and the white-tailed deer.

The plant and animal life on the island can be seen on one of the 2 1-hour long walking trails that pass over the terrain, through the forest, and to nearby waterfalls.

The following activities are prohibited inside the Cocos Island National Park: 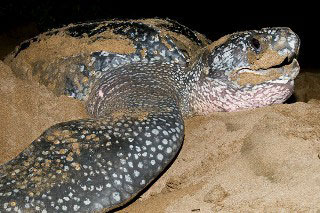 The massive new Seamounts Marine Management Area of Costa Rica will be larger in area than the Yellowstone National Park in the United States and includes the important group of seamounts southwest of Cocos Island. Seamounts serve as stepping stones for long-distance, migratory species, including sharks, turtles, whales and tuna, and it is hoped that the reserve will offer endangered marine species such as hammerhead sharks and leatherback turtles the chance to recover from increasing pressures.

Leatherback turtles are listed as 'Critically Endangered' and the Costa Rican population has declined by 40% in the last 8 years, and 90% in the past 20 years. Scalloped hammerhead sharks are on the globally Endangered species list, and are often targeted by fishermen for their fins which attract high market prices. Both scalloped hammerhead sharks and leatherback turtles are accidentally captured in commercial fishing operations.

Conservation International worked with local partners for the past 6 years, to help make this protected area a reality. Scott Henderson, Regional Marine Conservation Director for Conservation International said, "Protecting threatened marine life and ensuring thriving fisheries is what our Eastern Tropical Pacific Sea Escape Program is all about. Costa Rica and its neighbors are enormously important centers of marine diversity and abundance that underpin valuable fisheries and tourism industries. Today's announcement reconfirms Costa Rica's role as a regional leader in green economic development - extending this approach from its land to its oceans."

... The variety on the website is great. Dive The World is my first port of call when I'm thinking about a diving holiday / destination and a great resource for price comparison ... -- Peter Redman, Switzerland.  [More customer reviews]