Muck Your Guide to Diving in Lembeh Strait Newsletter

Mucking Around in Lembeh

Muck diving. It doesn't sound great does it? It certainly doesn't conjure up images of tropical blue water diving with sharks and rays and colourful coral. But for those in the know, muck diving is where it's at. Slowly the word is spreading that there is more to see underwater than big fish and corals. There are literally thousands of critters, previously ignored, that divers are travelling around the world to seek out. And probably the best place to seek them out is at the Lembeh Strait.

The Lembeh Strait separates Lembeh Island from the north Sulawesi peninsula in Indonesia. It's accessed from Manado City, just a 3.5 hour Silk Air direct flight from Singapore. This nutrient-rich channel is narrow and shallow. Much of the seabed is black volcanic sand. The coral is nothing to get excited about, the visibility is murky and the water can be a chilly 25°C. Have I tempted you to pack your dive bag and jump on the next plane yet? Probably not, but you should because the Lembeh Strait is the world Mecca for diving with weird, wonderful, rare, and as yet unknown species. And there are many fantastic dive resorts dotted along its shoreline. 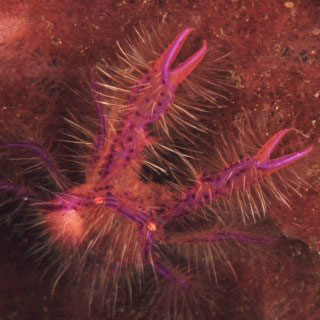 I visited the strait onboard MV Panunee and our first dive at Nudi Falls immediately convinced me that the hype about Lembeh was not exaggerated. Nudibranchs of all shapes and sizes littered the coral reef. We finned slowly over the gentle slope, me snapping away with my camera until we reached the highlight of the dive, a red sea fan that was home to 6 pygmy seahorses, each one smaller than my fingernail and utterly captivating. And that was where I stayed for the rest of that dive until my computer told me that it was time to surface.

So, 1 dive down and 1 species checked off my list of things to see.

The second dive at Police Pier II was just as good as the first with the ever present frogfish too numerous to count, Banggai cardinalfish, pink squat lobsters and finger dragonets. The great thing about the dives at Lembeh is that they are shallow and you therefore have a lot of bottom time to hunt and explore. Most dives lasted around 80 minutes and I soon got into a routine of hunting by myself but staying just close enough to Hengki to hear his tell tale grunt through the regulator when he found something special.

One of the dive sites, Jahir, is named after Hengki (and 4 other Indonesian guides called Jandi, Ade, Iwan and Robin). I was beginning to understand why that honour was bestowed on him when he introduced be to my first Ambon scorpionfish and my first hairy frogfish. That's 2 more critical critters ticked off my list.

Night dives at Lembeh really should not be missed. Often on a liveaboard, after 3 day dives, I'm tempted to skip the night dive in favour of a hot shower and a cold beer but I was convinced into a dusk dive at Retak Larry by the promise of sex - the mating of dragonets is an amazing spectacle! It requires a little patience as the smaller female often plays hard to get (don't they always?), but when she gives in to the amorous advances of the male and they rise off the bottom in unison, it's well worth the wait.

The show is soon over (isn't it always?) and, as the 2 lovers darted back to the bottom, we descended deeper in search of one of the weirdest creatures I've ever seen. The bobbit worm is positively alien looking with its open claws and multi coloured tube like body. We were lucky that the bobbit's that we came across were receptive to our torch beams and raised their bodies up out of their holes in the sand to give us a vibrant display. Towards the end of the dive a stargazer proved another popular photo subject, topping of a wonderful dive.

On the third day I saw my first flamboyant cuttlefish. Actually I saw 2, the smaller one giving the more colourful and aggressive display. By day 4 I still had a few 'want to sees' on my list so I asked Hengki what the chances were of seeing a blue ringed octopus and a mimic octopus. He said he'd see what he could do. We'd already seen a few long armed octopuses and an octopus with blue rings that I mistakenly thought was a blue ringed octopus and still haven't been able to find in any guide books. Then on our night dive back at Nudi Falls I heard an underwater scream. This wasn't Hengki's normal call so I knew that it must be good and I finned quickly over to see him pointing at a golf ball sized blue ring. It certainly didn't look as venomous as it is but as I got up close with my camera it swelled up its body and its bright blue rings flashed a warning.

I slept the sleep of a contented man that night but I still had 2 dives left on my final diving day and the morning dive at Critter Hunt produced the icing on the cake of an amazing trip. I had been told that I was unlikely to see a mimic octopus at this site and after 20 minutes of nothing spectacular this dive was turning into the least interesting of the trip so far. Then, in the sand at 20 metres, there it was. My camera's memory card was almost full but I still had some space for this little gem. What was it mimicking you may ask. Well, as far as I could see it was mimicking an octopus, but that was good enough for me.

And that pretty much wrapped up the trip. I saw more than I had dared hope. Only the elusive Rhinopia remains on my list for next time. Now I'm back in my Phuket home and while everyone else is diving over Thailand's beautiful coral reefs you'll find me crawling over the sand with my macro lens at the ready. I'm a born again muck diver.

For 3 weeks beginning October 7th, the North Sulawesi Aggressor will offer US$ 300 per person off the normal cruise price. So if you are want to plan a group trip to see the amazing Lembeh Strait and Bangka Island area now is the time to act and save big ...