I was hoping to end my Egyptian scuba odyssey on a high. An extended holiday had already taken me liveaboard cruising in the Red Sea, followed by day trip diving in Hurghada. Filled with anticipation, I took a 30 minute flight to Sharm El Sheikh.

Having never visited here before, I was interested to know why this spot is the most popular diving destination in the Red Sea. I was looking forward to caverns filled with glassfish, wrecks populated with jackfish, blue spotted stingrays everywhere and corals of all descriptions. 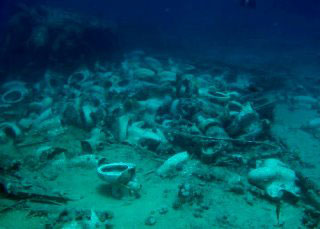 For our first day's diving at the "Garden Sites" near the harbour in Sharm El Sheikh, we had a relaxing dive at Fiddle Garden. The beginners in the group were entertained by the masked butterfly fish and attractive coral blocks in the shallows. The more advanced divers moseyed over the drop-off to descend the reef wall from 25 to 40m. Ominous looking moray eels gaped at us from their homes decorated in bright fire corals. Blue spotted stingrays drifted lazily on the sea bed, and several other fish species darted around the fans and corals.

For the next dive on that day we visited Near Garden on the way back to the harbour which was equally enjoyable. The sandy slope interspersed with coral outcrops, falls gently to 25m. This is a great spot to see the smaller colourful fish like the Red Sea bannerfish.

On the second day of diving in Sharm El Sheikh, we travelled 20 km south to dive the sites that everybody on the boat was talking about: Jackfish Alley and Shark Reef - Yolanda in the Ras Mohammed National Park. Situated on the slimmest part of the most southern tip of the Sinai Peninsula, this is the first and best-kept national park in Egypt.

The action started almost immediately when we entered a cavern opening at 5m. If you can maintain a controlled hover inside the cave, you will be delighted by the most spectacular light show as the sun rays filter through cracks in the rocks and deflect off swirling glassfish. Pure magic! The cavern turned out to be a swim-through and we emerged eyes wide in awe at 9m.

From there we made our way over to a satellite reef at 18m, covered in multicoloured corals and sponges, before we reached the sandy banks at the end of the dive. Jackfish Alley got its name from the huge amount of jackfish that can usually be seen here. There weren't that many jackfish on the day I was there, but we were treated to other predators like fierce looking barracuda and tuna hunting the glassfish.

This dive was absolutely amazing – it seemed as if every possible fish species that can be found in Sharm El Sheikh can be seen here. Beginning at Shark Reef, which consists of 2 peaks rising up from a sandy seabed deep below the surface, we were thrilled by gigantic tuna and many other large pelagics.

Then we allowed the current to carry us over to the Yolanda Wreck, lying between 15 – 25m. This merchant ship found its final resting place here in 1980, spreading its cargo of British standard toilets, bath tubs and pipe tubes to forever be part of this shallow reef. There is even an old BMW car wreck, rumour has it, belonging to the former captain of the Yolanda.

An ever-present school of barracuda and snappers are resident here and it's a great place for scuba divers to see Napoleon wrasse. There are literally thousands of jackfish, batfish, as well as all kinds of sting rays and giant moray eels. All in all, this proved to be a wonderfully fulfilling dive spot.

Woodhouse Reef is a steep wall covered with stunning large seafans and a dense growth of every variety of coral you can imagine. This is one of 4 reefs in the Strait of Tiran, located to the east of Sharm, the others being Gordon Reef, Thomas Reef and Jackson Reef, all named by 19th century British cartographers. We dived along the east side of the Woodhouse Reef, which is the longest and narrowest of the 4.

It is an action-packed drift dive. Enveloped in immense schools of snappers and fusiliers, you are spoilt for choice with what to feast your eyes on: stingrays flap gracefully out of the depths and enormous moray eels peer out of the rich coral background. Above you there is always pelagic action with tuna and hunting trevally joining the fray. The diversity of coral creations and marine life in the shallows makes for a fantastic safety stop.

Jackson Reef is the most northern of the 4 reefs in the Tiran Strait and it has a skeletal old freighter wreck sitting on top of the reef. The wreck doesn't form part of the dive profile as it rests on the outer side of the reef, inside the shipping lane. Nevertheless, it provides a dramatic photo opportunity, set against the harsh mountain landscape of the Sinai Peninsula behind it.

We started the dive at the south point and swam against a moderate current toward the north, along the eastern side of the reef. The current can be very strong, bringing in plenty of nutrient-rich water and helping to create one of the most colourful coral gardens in the region. Large schools of reef fish cling to the reef, trying to avoid venturing too far out into the blue where the predators were awaiting their next meal. 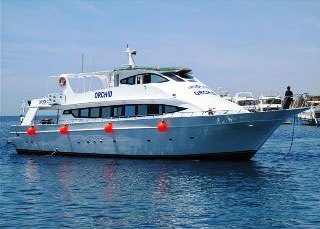 Accustomed as I was by now to Emperor Divers' exemplary standard of service, I was not to be disappointed in that regard. I was however, unprepared for the long wait that resulted from the security screening by Egyptian officials at the pier. Every person boarding a boat in the harbour was questioned. I was thankful that the queue happened to be in shade for most of the time.

Emperor's day trip boats don't have onboard compressors and therefore enough tanks for everyone to make 3 dives need to be loaded on the dive deck daily, which can make it a little cramped at times.

Apart from that, the dive briefings are very detailed and safety procedures are strictly adhered to. The crew is very helpful with getting your equipment on board, getting you kitted up and then helping you out of the water, which is a simple case of handing up your fins and then climbing up the ladder. Your used tank is replaced with a new one en-route to the next site.

Between dives, you can freshen up with a hot shower and then relax in the airy saloon or work on your tan on the sundeck.

After working up an appetite on the first 2 dives of the day, we were glad to enjoy a filling buffet lunch. With between 3 and 5 dishes a day there are many choices for everyone, including vegetarians. Special requests are accommodated if the crew is given advance notice. In order to keep you well hydrated in such a warm climate, there are always plenty of non-alcoholic drinks available. The crew encourages everyone to drink at least 3 litres of fluids per day. 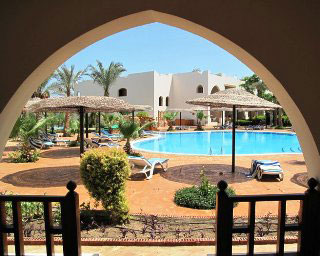 I flew into Hurghada from Sharm El Sheikh with Egypt Air, which took about 30 minutes. The transfer from the airport to the hotel took 20 minutes. More divers though, will arrive in Sharm on a 1 hour long flight via Egypt Air from Cairo. It's also possible to reach here on a direct 5 hour flight from the UK or Europe.

My trip was totally focused on scuba diving the Red Sea, so I looked for the most cost-effective place to stay. I chose the Royal Grand Sharm Hotel

, which is reasonably priced and the service was suitable to my needs. The drive to the dive centre each day was about 20 minutes (included in the package price). Visit hotelscombined.com for more Sharm El Sheikh accommodation choices

I haven't had the opportunity yet to explore all the dive sites in the Red Sea but, if I had to make a choice, I would choose day trip diving in Sharm El Sheikh. Blue spotted stingrays at almost every site, profusions of coral, and more fish than any other place I've dived on day trips, I'd give it a definite "thumbs up"!

... Dive The World is more informative and complete than other sites. I appreciate the wealth of information you provide about the dive locations and travel tips. ... -- Howard Chew, USA.  [More customer reviews]