Your Guide to Diving in Sharm El Sheikh

The historic peninsula of Sinai lies at the extreme northern end of the Red Sea, cut off on its west coast from the Egyptian mainland by the Gulf of Suez, and from the Arabian peninsula on its east coast by the Gulf of Aqaba. This area has had a rather bloody past but that doesn't stop scuba divers flocking to see this underwater wonderland now.

Located quite close to the southern tip of the Sinai Peninsula, Sharm El Sheikh is the most popular dive destination in the Red Sea and is the departure port for many liveaboard safaris around the peninsula and the northern Red Sea, as well as for diving day trips from the local holiday resorts. 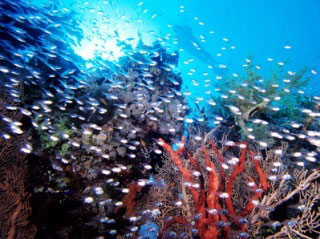 The local sites are often used for student training and for introduction dives. However, you don't need to travel far before you reach the exciting stuff.

To the east at the mouth of the Gulf of Aqaba lies Tiran Island and the Straits of Tiran, famed for their superb reefs and large fish and shark action. To the south lies Egypt's first marine protected area and national park, Ras Mohammed, with its colourful soft coral walls and buzzing marine life. And over on the west coast of the Sinai Peninsula but still easily accessed on diving day trips from Sharm El Sheikh, is the Dunraven and the world famous Thistlegorm World War II shipwreck. No trip to the Red Sea would be complete without a dive or two here.

It should not be forgotten too that Sharm El Sheikh isn't so far from the dive sites of northern Hurghada so wrecks such as the Rosalie Moller and the Abu Nuhas family of wrecks are often visited by Sinai liveaboards departing from Sharm.

This resort town is Egypt's premiere dive destination and offers its tourists everything they could wish for. With nightlife, choice restaurants, shopping opportunities and desert safaris, scuba diving in Sharm El Sheikh is convenient, varied and great value for money.

The 80m long Dunraven steamship was built in Newcastle, England in 1873. In March 1876, on her voyage up the Suez from India to the UK, she ran on to the reef and stuck fast off Shaab Mahmoud, south of Sharm El Sheikh. The crew worked frantically for 14 hours to dislodge her but she capsized and sank to the seabed at 30m with her cargo of cotton and wool. The crew were eventually rescued by local fishermen.
Show more

The wreck was only rediscovered in 1979 and now lies in 2 pieces, with its stern and large brass propeller to the north and the reef of the Sinai Peninsula to the west. It's possible to dive the entire length of the ship's interior so enter at the deepest section - the stern. The cavernous hull of the Dunraven is adorned with soft corals and black corals and is full of schooling goatfish and glassfish, squirrelfish and a few groupers and moray eels. Pass some ballast stones, the large boiler room and several breaks in the hull until you reach the bow at 15m. Here you can ascend and swim back along the upper surface of the ship.

The exterior of the Dunraven's hull is now covered in hard corals, with sea whips and gorgonians hanging from the vertical sections. It's a great place to spot nudibranchs, crocodilefish, scorpionfish and colourful clouds of fairy basslets. Rather than ascending up the buoy line to end your dive, you might choose instead to swim over the the reef slope. This is one of the top Sharm El Sheikh sites for fish density - the marine life here is very lively with a good chance to see Napoleon wrasse and turtles.

Overall, the Dunraven may not offer the spectacular artifacts of the Thistlegorm but then it doesn't attract huge crowds of scuba divers from Sharm either, so it will definitely be worth your while to include it in your Red Sea holiday.

'Delightful Cape', as Ras Ghamila means in Arabic, is the most northern of Sharm El Sheikh's local dive sites. It lies almost directly opposite Gordon Reef and separates a shallow, sandy lagoon from the sea. It is easy to find because it is the tongue of the reef that juts out eastwards upon which stand a green beacon to mark the western end of the Strait of Tiran.

The topography of the site is very simple with a relatively shallow fringing reef, and an extensive plateau that ranges in depth from 14-26m. The plateau is covered with coral bommies, huge table corals and the largest number of gorgonian sea fans at any of the dive sites around Sharm. Fantail rays, groupers and turtles can often be spotted here. As your air slowly reduces, allow the current to push you gently towards the beacon to end your dive in the shallows there.

Still Egypt's most popular marine park, Ras Mohamed's waters off the tip of the Sinai Peninsula have been protected from fishing since the 1980s, and it shows ... Drifting along the wall from Shark Reef to Yolanda Reef, you are often likely to encounter passing trevally and barracuda that frequent the region for breeding. The reefs have become safe havens to many of the Red Sea's endemic fish species.

This site is located at the north end of Sharm El Sheikh Harbour. It is one of the most exciting local dive sites since it has a varied topography, as well as fast currents and the potential of pelagic sightings.
Show more

The site has a coral shelf that follows the shoreline. The dive starts at the south side of the headland (‘Ras’ is an Arabic word for ‘Cape’) with a steep wall drop off to 20-25 metres which has a superb gorgonian forest. The wall gives way to a large plateau that swarms with marine life. The hard coral pinnacles and heads of acropora and fire corals host scorpionfish, lionfish, morays, nudibranchs and schools of batfish. Blue-spotted sting rays and crocodilefish can be found on the intermittent sandy patches. Larger fish found here include angelfish, triggerfish, parrotfish and yellowspine surgeonfish.

If there is a current then there is a chance for scuba divers to see Napoleon wrasse, and schools of snappers, jacks and barracuda at the corner. Be careful not to get swept away by the current as this will make it impossible to return to the exit point.

With its historical cargo of World War II machinery and equipment, all neatly stowed in its open holds, the wreck of the Thistlegorm would be a highlight of diving anywhere in the world, not just in Sharm El Sheikh. It couldn't have been more conveniently located for diver exploration if it had been scuttled for the very purpose rather than sunk by German bombers. This most famous of Sinai dives and the most popular dive site in the world, has to be experienced several times to truly appreciate all its wonders.

The 4 reef systems that make up the Tiran area - Jackson Reef, Woodhouse Reef, Thomas Reef, Gordon Reef - are popular with experienced and adventurous divers. The coral reef plateaus are loaded with fish life and the deep wall drop offs offer the opportunity of encounters with hammerhead sharks, pelagic fish and occasional tiger sharks. On Jackson Reef you are most likely to see hammerheads from July to September.


How to Dive the Sinai Peninsula 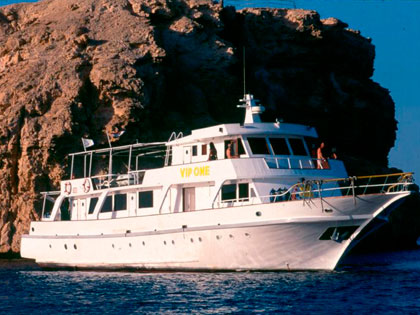 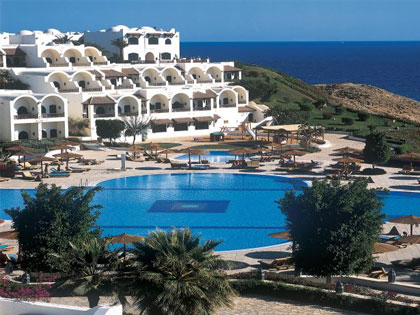 Some Red Sea liveaboard trips out of Sharm El Sheikh take in the best of the Sinai Peninsula diving region, from the straits of Tiran across to Ras Mohammed and the Thistlegorm. Other Sinai liveaboard itineraries focus on the southern section of the peninsula and the wrecks of northern Hurghada. Fully-inclusive liveaboards are highly cost-effective and minimise travel time between sites.

Day trips from Sharm El Sheikh will visit the local dive sites, as well as the Straits of Tiran, Ras Mohammed, the Thistlegorm, the Dunraven, and even up to the Blue Hole at Dahab. Day trips are good for those that prefer to sleep on land, but daily travel times can be as long as 3 hours each way.


For the ultimate Red Sea holiday of a lifetime, why not combine your dive trip with a tour to discover the historical sights of Egypt? You can take an overland tour of Cairo or a Nile River cruise: Egyptian antiquity tours.

It is possible to dive Sharm El Sheikh all year round. Water temperatures in the Sinai Peninsula peak at 27-28°C during July to September. After the European summer the temperatures fall from 27-25°C in October and November. They continue downward from December to January, before reaching an annual low of 22°C in February. The water warms up again from 23-26°C between March and June. Air temperatures follow a similar pattern with an average of 35-38°C in the summer and 22-24°C in the November to February winter period.

October and November are peak season for scuba diving in Egypt with what could be described as 'low season' being the winter months of December to January, when the surface can become choppy. This can bring the otherwise excellent winter visibility down a little and even make some of the sites inaccessible.

has some useful information on the climate of Sharm El Sheikh.

Where is Sharm El Sheikh and How Do I Get There?

Review our maps below of the Sinai region and its host country Egypt. Here, you will find information on how to get to Sharm El Sheikh.

... The communication was fast (within 24 hours) and gave good recommendations. Everything went well with my diving trip ... -- Tiffany Ng, Singapore.  [More customer reviews]