A History of the Formation of the Red Sea

Why Egypt's Famous Dive Destination has High Levels of Endemism

The Red Sea is a rather narrow trench of water, running northwest to south easterly, approximately 2,000 km long and 2,000m deep, formed some 38 million years ago.

It has a remarkably high number of endemic (that is, live exclusively in the region) fish and invertebrate marine species, thought to be in the region of 20% of species living here. This is one of the main attractions to scuba dive in the Red Sea since you can only ever see these fish species by visiting here.

Roughly, 5 million years ago only the northern end was connected to the Mediterranean Sea. As the land slowly uplifted, the Mediterranean connection closed and the Red Sea basin became a great evaporation pan, forming thick salt levels which later would raise the sea's salinity levels.

Some time later its southern end at the Strait of Perim finally opened, making it the northwest appendix to the Indian Ocean. Water filled the trough, bringing with it fish species from the Indo-Pacific. However, due to the narrow and shallow nature of its mouth, the Red Sea is partially isolated and has a mean temperature and salinity higher than the adjacent Indian Ocean.

What's more, during the later ice ages as little as 15,000 years ago, so much water was locked up in polar ice that water levels fell over 100m from its current level. This would have cut off the newly formed Red Sea from the Indian Ocean once more. 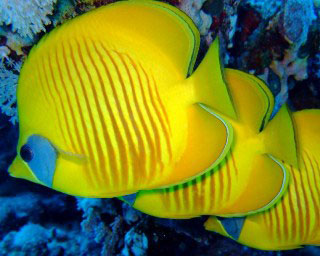 These conditions then triggered the evolutionary processes that resulted in the high numbers of endemic species that you'll find when diving in the Red Sea and nearby Gulf of Aden, often with closely related counterparts in the nearby Indian Ocean.

Naturally, endemic species will be reef inhabitants and not pelagic fish, so it is perhaps no surprise that the highest levels of endemism are found in species such as the dottybacks, triplefin blennies and butterflyfish, half of which are endemic.

The Red Sea only reached its current level 5,000 years ago so its coral reefs are still relatively young. The southern end at the Strait of Perim is also known as Bab El Mandeb (meaning "Gate of Lamentations"). It is 29 km wide at this point and only 130m deep, making it the narrowest and shallowest part of the sea. Indeed, Somali folklore even has it that their ancestors crossed over these straits from Arabia.

... Quick responses to all my questions. I didn't need to worry about anything regarding my trip, all information was available and easily accessible. All top service ... -- Pete Cairns, South Africa.  [More customer reviews]