Finding yourself engulfed by a large school of bumphead parrotfish as they nonchalantly munch their way through acres of coral reef, is an experience not easily forgotten.

You may be busy inspecting the nooks and crannies of a reef or gliding gently along a steep drop-off when suddenly your senses are alerted to the presence of these magnificent fish. Normally traveling in schools they often appear like a squadron of marauders filling divers' ears with their noisy crunching and excreting wafts of fine sand onto the ocean floor.

With large green bodies, blunt pink heads and gaping, prominent teeth, they may not win any beauty contests, but make for great photo subjects and provide a vital service for those who love the feeling of fine white sand between their toes as they stroll along the beach. What is so special about the bumphead (or humphead) parrotfish? Let’s find out… 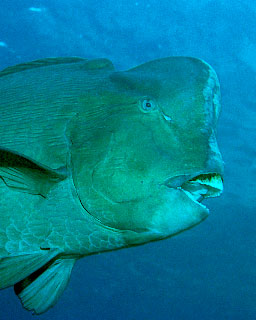 The humphead is the largest of the parrotfishes at 130 cm in length and weighing up to 46 kg. They are distinguished by beak-like teeth plates only partially covered by fleshy lips. Males and females look the same in this species. The juveniles start out a greenish brown colour with 5 bands of whitish spots arrayed vertically along their body. As the adults mature they develop a pronounced bump on their vertical head profile. When fully grown they range from olive or bluish-green to slate grey, with a yellowish to pink blaze down the front of their face.

Adults are sometimes confused with the juvenile Napoleon wrasse, which can be differentiated by 2 black lines running behind its eye.

Gregarious by nature, bumphead parrotfish form shoals of 20 to 100 fish, resting in shallow, sandy lagoon flats, around caves and shipwrecks at night. During the day, the adults move to the seaward side as they scour the coral reef for food.

In areas where they are exposed to fishing pressure or high sea traffic, humpheads have become wary of reefs near human habitats. In marine protected areas these gentle giants are far more approachable and even indifferent to divers. You can often see them tearing around before your eyes and seemingly not paying you the slightest bit of notice.

Bumphead parrotfish are primarily corallivores. Feeding on benthic algae and live coral during the day, the school leaves the reef lagoon with the adults moving further afield, while the juveniles remain closer to home in seagrass beds. Humpheads truly live up to their name by occasionally bumping the coral with their heads, breaking it into smaller pieces that are more easily consumed.

They are equipped with pharyngeal teeth at the back of their throat to sufficiently grind the hard coral into a digestible paste. Any indigestible elements are passed out in the fish's faeces, creating vital sediment. As each fish consumes up to 5 tons of reef carbonates per year, they are important coral sand producers, positively affecting the resilience of the coral reef's ecosystem. Of course this fine white sand often ends up washing ashore, so think of that the next time you are on a soft powdery beach. You may be grateful that the earth beneath your feet had passed through some bumpheads' alimentary canal, although fish poop might not be a great conversation topic during a romantic stroll!

Most humphead parrotfish begin life as females, with even the males possessing hermaphroditic qualities which are triggered during a pre-reproductive period to undergo the physiological changes required to become a male when the dominant male dies, or leaves the group. Courtship and pelagic spawning activities occur during the early morning of a lunar cycle.

Large gatherings of up to 100 tightly packed fish collect at channel mouths, near gutters or promontories. 2 fish will voluntarily rise, front-to-front, to approximately 1m below the surface, where they discharge a haze of sperm and eggs. The couple then returns to the shoal.

The newly-hatched humphead larvae drift with the current, where they feed on algae until they can seek refuge in the shallows, preferring mangrove forest root systems and seagrass lagoons where they feed primarily on seaweed for up to 3 years before joining the adults in the reefs.

Slow to mature, bumphead parrotfish only begin reproduction late in their cycle, when no smaller than 60 cm in length. Considering they live up to 40 years and grow to 130 cm, this results in slow replenishment of the species.

Occasionally preyed upon by large sharks, humans present the greatest threat to the double-headed parrotfish. They return to the same location every night to sleep in large shoals, making them extremely vulnerable to spearfishermen and netters. In addition, there is a high demand for these fish in the aquarium trade. Traditionally this fish is also captured for ceremonial events and has a high culturally significant value in certain island communities.

Prevalent near coral reefs throughout the Indo-Pacific region, the highest concentrations of this species is found in Micronesia, Malaysia and the Great Barrier Reef of Australia. Unfortunately bumpheads have been fished to extinction in some regions.

The humphead's daily routine always keeps them close to the coral reef they depend on for food. Moving into the shallow, sandy lagoons at night, they search out caves and wrecks to sleep in. At daybreak the adults venture into seaward barrier or fringing reefs up to a depth of 30m. The juveniles remain in more sheltered lagoons and grassy seabeds.

The bumphead parrotfish is categorised as ‘vulnerable’ on the World Conservation Union (IUCN) 'Red List of Threatened Species' and as a Management Unit Species (MUS) in the Coral Reef Ecosystems Fishery Management Plan for the Western Pacific. The slow growth and delayed reproduction of the humphead results in slow replenishment of the species, making them very vulnerable to over-fishing. Major pressure comes from the commercial fishing industry. Scuba assisted spearfishing of the past resulted in the bumphead almost being fished to extinction in Fiji.

Island communities are realising the valuable economic rewards resulting from the diving tourist trade, making them more amenable to conservation strategies. Fishing regulations in many countries now include the ban on the use of spear-fishing and night fishing of this species; and an ever-increasing number of coral reefs are being declared as marine protected areas or "no-take" zones. These measures are vital for the continued presence of the humphead parrotfish in our oceans.

There are many destinations for diving in the presence of these memorable creatures:


Dive The World Recommendations: the Great Barrier Reef in Australia, Sipadan Island in Malaysia and Ras Mohammed in the Red Sea.

... Making a booking through Dive The World gave me great peace of mind, not having to worry about finding a reputable PADI dive provider in a foreign country, not having to book my own accommodation/transfers etc. I have recommended Dive The World to several colleagues since returning to work and will be using you to book my next dive holiday ... -- Clare Phillips, Australia.  [More customer reviews]