Your Guide to Diving in Gorontalo

Scuba diving was only started here around the year 2000 by an enthusiast who was keen to find a viable alternative to the more established and popular nearby destinations in Sulawesi.

Located on the rugged, northern coastline of mountains and rolling hills in Tomini Bay, Gorontalo not only has similar riches in biodiversity, but it also has its own unique mix of marine life and many species that are endemic to this area. To date 10 new species, some only ever found in Gorontalo, have been internationally recognised and many more are slated for further investigation. 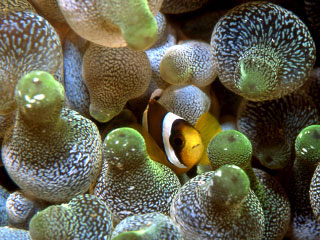 You may be wondering why the Gorontalo diving sites would posess such exciting and colourful creatures as the orange-backed wrasse, yellow-spotted slingjaw wrasse, Sarasvati's commensal shrimp and Coleman's coral shrimp. The truth lies in the unique conditions that exist here - Gorontalo is located very close to the Equator and its coastal walls plunge into a deep and very calm bay, allowing deep water marine species to come in very close to the dive sites. It's also near the centre of "The Golden Triangle" of marine bio-diversity.

Traffic Jam is a good example. What makes this Gorontalo diving spot special are the 10 natural convolutions in the wall that form vertical shafts; perfect congregating areas for masses of juvenile fish seeking protection and shelter. The line up of colourful wrasses, angelfish and butterflyfish is worth the entrance ticket alone. Then you can explore the walls themselves, covered in a spectacular range of sponges, harbouring Coleman's coral shrimp and many nudibranchs.

With the 15 sites being just a few minutes from town, diving in Gorontalo will appeal to you if you have an interest in marine life identification and in absorbing some authentic culture of Indonesian rural city life. The latest dive destination in Indonesia to be receiving media attention and earning plaudits, Gorontalo, which is only a daily 1 hour flight from Manado International Airport, rightly deserves the praise and its place amongst the top diving destinations in Sulawesi.

Honeycomb is a west facing, north-south wall covered with porous corals, sponges and pink cupressina hydroids. What makes this site special is the spectacular array of abundant and unusual fish species. For starters, try spotting the blue-headed tilefish. They can often be seen in Gorontalo swimming in pairs and are easily identifiable by their blue heads on an otherwise yellow body with a scissor tail. More difficult to spot is the rare sailfin goby, found mainly on rock ledges. These small grey fish have a semicircular dorsal fin with an orange aura and a dark central spot. The fish also has bright orange bands down its body.
Show more

Slightly more common but beautiful nonetheless are the gilded triggerfish. Males are pale blue with royal blue cheeks and with a yellow bright edging on their fins. Females are gun-metal grey with checkered cheeks. Then there's the pink-tailed (often green here) triggerfish. These triggers have brown/black bodies and white fins (apart from the tail that is). At the top end of the fish size scale for scuba divers to spot in Gorontalo are Napoleon wrasse, long-nose emporers, bigmouth mackerel and unicornfish.

Honeycomb also has the most beautiful tunnel in Gorontalo. At a depth of 15m and running through the sides of a buttress, the tunnel is full of sea fans and telestia coral bushes. Finally, there's a cavern at 18-20m depth too. The cavern is 6 metres wide, laced with pale, delicate sponges, and booby-trapped by black coral bushes and scorpionfish lying in wait.

In 1942 this Japanese cargo ship was sailing out of Gorontalo port laden with wood, rattan, and copra. The engine caught fire and the captain made an attempt to salvage the cargo by steering the stricken ship onto shore. Unfortunately the reef dealt a blow to these plans and the ship sank adjacent and parallel to the reef slope, with all the cargo being lost.
Show more

The wreck now lies upside down. The 50 metre long hull rests with its bow to the south east on 47 metres and is decorated with sea fans and blue and purple gorgonian sea whips. Salvador Dali sponges grow on the deeper levels. The top of the wreck (now the hull) lies within recreational diving limits, between 40m and 26m, with the sponge-encrusted propeller at the stern being the shallowest section. There's also lots of scattered debris on the reef slope that runs down to 20 metres.

Back on the steep banking reef there are swarms of purple queens. Gorontalo seems to bring out slightly different colour variations in fish and these anthias are no exception. Females are violet with an orange spine, and the males are magenta-blue with a yellow jaw. Glued to the banking are cushion star fish. Take a good look on their surface as they are often host to tiny emperor shrimps.

Pyjama cardinalfish rest out the daylight hours hidden in the acropora branches. These delightful fish are very shy but unmistakable once found. They have red eyes, yellow heads, a dark band around the middle of the bodies and a spotted rear body and tail. Other cardinalfish you can find here are the redspot cardinalfish (spot is on the tail fin) and split-banded cardinalfish (typical red and white striped body, but with blue eyes).

Heading back to the shallows at the end of your dive, there's a good chance of seeing large cuttlefish. Orange back wrasse wing their merry way about, and orange skunk anemonefish busy themselves protecting their eggs near their host anemones.

This is a rather unusual Gorontalo dive site offering a wide diversity of habitats and consequently Sentinels has great fish life. It offers a series of 26 pinnacles at various depths running south west along the fringe of a sloping reef with a shallow reef flat. Some pinnacles rise up like long thin fingers, others like stumpy buttresses with series' of tiered acropora table corals. White fox-tail colonial tunicates hang from the overhangs at the base of the pinnacles.
Show more

Slowly ascending through the pinnacles, divers are sure to find lionfish, barramundi, lyre-tail grouper, solor wrasse and orange-back wrasse. These latter fish are endemic to the area and are easy to identify - orange back, blue belly and purple head. The very rare pink-eyed goby can be found here, so too are hingebeak shrimps and Sarasvati's commensal shrimp (only identified in 2002).

As you move up the reef slope watch out for the Indian mimic surgeonfish, Lamarck's angelfish, orangetip bristletooths, yellowtail fusiliers and hybrid flasher wrasse. As you can see from that list, this Gorontalo site offers an excellent snapshot of most major tropical fish groupings and has something for everyone.

This is a another west facing, north-south wall, but with the added feature of 10 vertical shafts sunk into the wall, creating convolutions large enough for you to enter and explore. These shafts act as resting places and masses of juvenile fish tend to congregate inside them. This is how Traffic Jam got its name.
Show more

Traffic Jam is famous as one of the best places to find Coleman's coral shrimp (Vir colemani), only identified in December 2003. This creature measures up to all of a centimetre, is transparent with purple joints - as you can imagine, not the easiest critter to find. Try spotting them on the white clusters of bubble coral heads that dot the wall.

Some common sightings on this diving site are common plankton feeders such as blue-dash and yellow-dash fusiliers, lemon damsels, teardrop butterflyfish and velvet unicornfish. Other fish you might see are the 2-spined angelfish - blue body with a red/orange body patch, Allen's tube-lipped wrasse, yellow-spot slingjaw wrasse, lined chromis, and the solor boxfish with its peculiar grey marble colouration.

Gorontalo diving also has its fair share of marine mammals. Bottlenose dolphins are often seen from the dive boat, and there's even a chance they may pay you a visit on your safety stop.


How to Dive Gorontalo 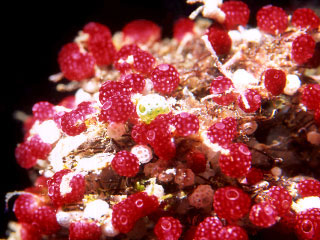 Regretfully, due to the lack of reliable flight operators and regular flights at the time, we have stopped offering diving packages in Gorontalo.

But with only one dive centre operating in Gorontalo, you can sample for yourself this fascinating brand of deep healthy coral walls, wreck diving, pinnacles and bays, in waters that are only crowded by fish. The centre is clled Miguel's Diving.

The Gorontalo scuba diving season runs from November to April. Outside of this time, the winds make surface conditions too unreliable for trips to be guaranteed.

... Thanks for making our vacation so easy. I am already looking into our next trip and expect that you will be hearing from me again. ... -- Lisa Yogiinka, China.  [More customer reviews]