Your Guide to Noonu Atoll

There are many dives in Maldives where you might expect to see sharks but, as with so much of the world's oceans, where sharks once were they are no longer. Many spots in the Northern Atolls enjoy conditions and food sources that one would imagine sharks would indeed find suitable, yet they remain a rarity.

Orimas Thila at Noonu Atoll (also know as Southern Miladhunmadulu) is not one of those sites. This dive begins with a drop down over a reef which meets a sandy floor of 30+ metres. Look out here for eagle rays, as well as soldierfish and blue-lined snapper in quieter areas. Currents will guide you along the side of the reef to where there is a sandy channel. 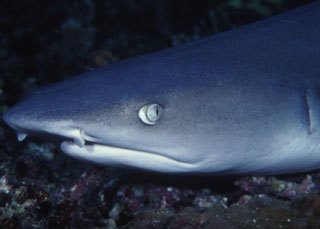 This is usually where the real stars of the show appear: grey reef sharks. They tend to swim in patterns over the top of a second reef and can be viewed from the sandy channel or from a little ledge down-current from them. These areas allow them to continue their natural behaviour which becomes disrupted if you are up-current from them or in the area of the reef they consider to be "their patch".

The best spot is at the ledge down-current from them. From this viewing area you can rest, mostly out of sight and either kneel on the floor, or hook on if there is current, and observe the sharks circling around and sometimes wriggling in response to being cleaned. Seeing 20 or more sharks is not uncommon here and they range in size from juveniles under a metre long to meaty adults of 3 or 4 metres. Several females are heavily scarred from aggressive mating. It is an exciting shark dive by most gauges but particularly so since sharks are so uncommon in many parts of the Northern Atolls. As such, Orimas Thila is a highlight for many people on a scuba diving trip in the Maldives.

Christmas Tree Rock is a site noteworthy for many reasons, not least its topography. Unsurprisingly, it resembles a Christmas tree. It is a pinnacle which starts from a broad low base and rises up to a thinner top with a series of ledges and plateaus, all sheltering plenty of life and with ample size for for divers to swim through.

It is worth peering under the base ledge where you might find a resting white tip reef shark or marble rays which often shelter here. From the base you will then proceed to wind your way up the structure. At each higher level some of the bubbles blown below filter up in streams through pores in the reef. Yellow-lined snapper, trevally and tuna are all numerous here.

Orange basslets, blennies, dottybacks together number in their thousands and wrap around the tree like fairy lights. You will finally emerge at the top of the reef at around 12 to 15 metres depth. There is a feature where the rock juts out like an arrow with 2 tubastrea corals at the tip. Follow the direction of this arrow to a nearby shallow reef where you can run down your tank and do your safety stop while enjoying the hard coral garden that comes to within 2 or 3 metres of the surface.

Christmas Tree Rock is often mentioned as a favourite site for those who dive Maldives in the Northern Atolls. This may be partly because of its interesting topography, partly due to the variety of large and small marine life, and also because it has a memorable name!

... The website did a good job of describing the resort and the dive experience. The trip went smoothly with everything organized as expected. The plane reservations also worked out well. You did a very nice job ... -- Dan Kappes, USA.  [More customer reviews]