Some of the world's most experienced tropical marine scientists, led by The Nature Conservancy, completed a 3 week expedition to the Indonesian islands of Raja Ampat, where they confirmed that the area contains the richest coral reefs in the world. 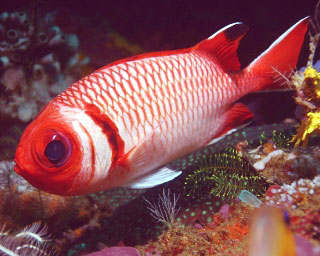 The Raja Ampat islands are located to the west of Sorong, on the northwest tip of the island of New Guinea in the Papua Province of Indonesia. The 4 main islands - Waigeo, Batanta, Salawati and Misool - and their thousands of satellite islands cover an area of some 23,630 square miles (61,200 sq. kilometres).

The scientists found that the number of reef fish and coral species in the area is even greater than previously expected. At least 465 coral species were recorded, with at least 20 species defying identification and under further study. This brings the total confirmed corals from the Raja Ampat islands to 505 species, which is an incredible 64% of all known coral species in the world (for more recent estimations of numbers, see our 2006 survey report).

During the trip, 828 fish species were recorded, adding an additional 95 (including 4 new to Indonesia) and raising the known total for the region to 1,065 species - amongst the highest diversity in the world. A new personal record of 284 fish species on 1 single dive in Raja Ampat was set by Dr. Gerry Allen at Kofiau Island. When lab results on marine samples are completed, the scientists expect to find species of fish and coral that are new to science.

"The waters around the Raja Ampat Islands are teeming with a diversity of fish and corals surpassing anyplace else on Earth", said Steve McCormick, president of The Nature Conservancy. "This spot is at the heart of the heart of marine biodiversity, and every effort must be made to conserve it".

"While we constantly see reports of decimated and degraded marine ecosystems in western and central Indonesia, this survey is clear proof that there is still a chance to conserve significant, high quality island and reef ecosystems in Indonesia", added the Conservancy's Indonesia Country Director, Dr Ian Dutton. "The Conservancy is working in partnership with local communities and government, university and industry partners to protect this amazing area".

Raja Ampat has just become an independent administrative area, or Kabupaten, and there are concerns that the need to raise local revenue will result in widespread extraction of natural resources. Results of this marine study and associated maps will be presented to the local communities to educate them about the rich biodiversity that the area possesses and solicit ideas on how best to conserve it. It will help the local government draw up environmentally sensitive plans for development, and help the Conservancy and other conservation organisations determine how best to protect this remote tropical paradise. 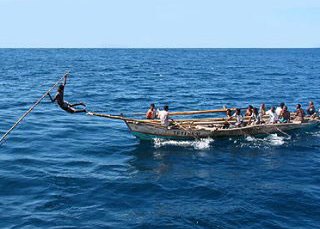 "Customary ownership and resource use traditions of the area mean that some of the reefs have escaped the ravages common to many other Southeast Asian reefs", said Dr. Rod Salm, the Conservancy's director of coastal marine conservation in Asia-Pacific. "This is a really exciting opportunity to develop a conservation program with communities that have a strong personal and historical commitment to managing their resources sustainably".

The scientists found many of Raja Ampat's reefs to be in generally good condition despite the rampant reef destruction often seen in Southeast Asia. Parts of reefs damaged by blast and cyanide fishing showed good recovery, and there were few signs of the extensive coral bleaching that devastated reefs in many areas of the world following the 1998 El Niño. The fact that the corals resisted bleaching confirms their resilience and value as a source of larvae to aid in the recovery of damaged reefs widely throughout Indonesia, Philippines, Papua New Guinea and Micronesia.

The team also noted a virtual absence of sharks during the trip - only 3 large sharks were seen in 500 hours of research diving. Over-fishing has caused a steep decline in the Raja Ampat shark population. Shark fins are highly sought after as a soup ingredient in Asia. There are around 200 shark-fishing boats active in this area, and they each can catch an estimated 240 sharks per month. Once fins are removed, the bodies are left to rot on the reefs. The removal of the ecosystem's top predator is only one of the damaging effects of humans on the reefs - the buzz of chain saws, the crash of falling trees, and bombing and cyanide fishing are still widely practiced, and turtles are being over-harvested at every location they nest.

Terrestrial teams found many unique habitats in Raja Ampat, particularly the broken-bottle landscape of karst limestone, and the mineral-rich soils of the northern islands. Around these islands the extreme habitat has resulted in high levels of endemism - although overall diversity is low, many of the plant species are found only in this particular habitat. Several potentially new species of plants were discovered, including a new species of the tropical flowering plant Psychotria on Kawe Island.

Local communities are very concerned about the damage being caused to their environment as on the whole they depend on marine resources for their livelihood. Extractive industries such as logging and commercial fishing threaten to destroy the rich diversity of plant and animal life in these remote islands. Consistently, researchers on the socio-economic team were told by local villagers that they feel powerless to thwart the outside resource raiders who do most of the damage, as they often are backed by powerful commercial and government interests.

Some of the world's best marine scientists, led by The Nature Conservancy, spent nearly a month in 2002 at sea traversing these Indonesian islands searching for new species of fish, corals and marine life:

From 31 October to 22 November 2002, a team of international scientists conducted a 'rapid ecological assessment' of the marine and terrestrial habitats of the Raja Ampat Islands, considered the centre of the bull's-eye of Earth's marine biodiversity. 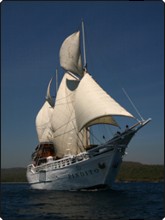 Based on the Indonesia live-aboard dive boat MV Pindito, the team of international scientists traversed 700 nautical miles through the Raja Ampat group, focussing on the islands of Misool, Wayag and Waigeo, this region is easily the most important location for corals in the world. The team spent 3 weeks scuba diving, counting fish and coral species and recording marine conditions. On land, they recorded plant and animal life and interviewed local residents to assess the overall biodiversity of the Raja Ampat islands.

The survey included biologists from The Nature Conservancy, World Wildlife Fund Indonesia, Indonesian Institute of Science, Western Australian Museum, Harvard Herbarium and the University of Papua. The scientists expected to find new species of plants and animals, particularly on some of the most isolated islands that are in effect mini-continents where new species can evolve in response to unique features of their habitat. A recent 15-day study found 4 previously undescribed species of stomatopod shrimp, and the highest overall stomatopod diversity in all of Indonesia.

A socio-economic team investigated the scale of economic impacts in the Raja Ampat area, and interviewed local residents about their attitudes toward their environment, land ownership and traditional regulations for managing access to natural resources.

Alfred Russell Wallace visited the area in 1860, when he studied the Red Bird of Paradise, and collected large numbers of previously unknown insects, birds and mammals. It was one of the places that helped him develop the theory of evolution, in parallel with Charles Darwin.

... Beef was patient and gave me all the information I had requested for. Clearly Dive The World will be our first choice for our next dive vacation as you get what you want and much more ... -- Pallavi Jayaprakash, India.  [More customer reviews]