Your Guide to Haa Dhaalu Atoll

Cruising over to the south side of Theefarido Thila at Haa Dhaalu Atoll (also known as Southern Thiladhunmathi), you start your scuba dive with one of the best walls you can experience in this region. The large tongue of rock acts as a natural shelter where the soft corals can grow unaffected by the strongest effects of the current flowing from north to south. There is a profusion of various shades of yellow soft corals, interspersed with splashes of red sea fans adding highlights to this beautifully memorable seascape.

While in your colour-induced reverie, you can spot varicosa nudibranchs in abundance, along with eye-catching flabellinas. Have a look inside each fissure and cavity in the wall to see lobsters peering at you. Traversing towards the end of the wall, you cross a canyon and may instantly be surrounded by schooling yellow snappers, or overtaken by swiftly moving blue and yellow dash fusiliers. Beneath you the swaying anemones are guarded by their ever-alert clownfish. 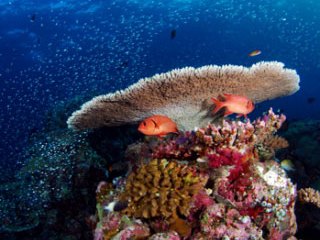 Reaching the other side of the canyon, which stretches the entire length of the rock, you begin your ascent by easily finning west along the top of the tongue and the natural topography of the rock will gently bring you up to around 13 metres, while keeping you entertained all the way with colourful coral and marine creatures.

Anemone Thila is another unforgettable dive site off the coast of Theefaridhoo Island. Stretching from east to west, you begin on the north side of the pinnacle. Descend quickly to the sandy bottom where leopard sharks shelter from the south to north current. The absence of other boats in the area makes this encounter almost guaranteed.

The clear 29°C water coupled with the bright sun overhead means the visibility can be breathtaking. As the sunlight dances over the sandy floor you could be forgiven for thinking you were at 10 metres rather than close to 30 metres. Other sights on the seabed include stingrays and marble rays partially covered by the sand with only their eyes showing.

Then turn your attention to the north wall where huge Napoleon wrasse seem to play with shoals of yellowfin trevallies, set against a backdrop of colourful soft corals blanketing the rock face. The summit of the thila is covered with hard coral, mainly porites and acropora table corals.

Anemones are prolific giving the site it's name and moving in and around the anemones you will be treated to moray eels and pipefish. Current allowing, your dive will continue to the very east of the thila to be waved farewell by the lobsters who live in the crevices.

Nellaidhoo Thila is really one of those dives where you'll kick yourself if you forget your camera. Your first shot presents itself as you reach the top of the pinnacle where black and white tip reef sharks feed amongst a flurry of smaller fish trying to make their escape.

It can be quite intimidating to see the larger sharks heading directly towards you and then veering away from you at the last minute as they follow their prey, but in reality they seem totally oblivious to the scuba divers enthralled by the action. The only thing you'll wish for at that moment is for your air to last forever so you won't have to leave.

Dragging your eyes away from the shark spectacle you will see mantas soaring above you amidst batfish and large schools of giant trevallies. Glance below you and feast your eyes on moray eels and nudis in the hard coral formations. If the current allows you, fin over to the east of the pinnacle to search for some of the guitar and leopard sharks of the Maldives, napping among the big rocks on the sea floor.

Slipping into the dark water on a night dive at Magic Mushroom, you follow the mooring line from the dhoni to the mushroom-shaped 80 square metre head of the pinnacle at around 13 metres. Shining your torch brings the colours of the hard coral and sea fans to life as you discover sleeping groupers, parrotfish, snappers and angelfish. But not all the marine life sleeps at night. Being careful not to damage their sensitive eyes by shining the light directly at them, you will see red coral crabs and the largest of the lobsters coming out to forage for scraps left over from the days feeding.

Turning away from the coral and shining your torch into the blue reveals the full length of scary looking moray eels, who are always far larger than they appear when snapping at you from their daytime refuges.

When diving Magic Mushroom during the day, you can descend to 28 metres and take far longer to lose yourself in the beauty of the east wall, gazing at many interesting species going about their daily lives, like nudibranchs, cleaner and mantis shrimp. The wall rises to 6 metres so your safety stop will be over before you are even aware of it.

On the west side of the reef around Naiuaadhoo Island, you get to experience the adventure dive of Buda Cave. The cave mouth is an incredible 60 metres across, rising from a depth of 30 to 25 metres. Plenty of surprises await you as you venture 15 metres into the cave. Remember to take your torch to spot sleeping nurse sharks and wandering white tip reef sharks. Towards the south side of the cave you will find at least 4-5 marble rays dozing behind 2 large rocks. When seen from the inside, the contrast of the sunlight filtering through the water framed by the cavern walls makes for a spectacular photo, especially if you catch a white tip against the light.

On leaving the cave the hard coral covering the wall is rich with amazing creatures. Curious Napoleon wrasse seem to follow you up the wall and you could even spot a turtle and a few mantas. A wonderful way to end your dive!

... The service from Dive The World (Philippa) was yet again excellent, even though the dive operator was quite slow to respond at times and especially as regards local flights and hotel recommendations. They also provided the required legal forms to fill at a very late stage. However, we felt comfortable booking the service with Dive The World as agent even though the operator's responses were tardy. Without their support we would have been much more worried ... -- Mikko Huimala, Finland.  [More customer reviews]