The Atolls of Meemu and Felidhoo (Vaavu) on the MY Sheena

"The seaplane flight was unforgettable" was heard repeatedly during my dive cruise onboard the liveaboard, M/Y Sheena in the southern atolls of Meemu and Felidhoo (Vaavu), but that just marked the beginning of a fantastic week's diving. Aside from the awesome flight, there was plenty more to marvel at under the surface of the turquoise-blue waters, such as the many sharks, manta rays and beautiful corals. The dive sites we visited are out-of-this-world and I experienced a rollercoaster of emotions - from excitement to wonder to awe and back again!

The Maldives is one of those destinations that as a keen diver you just have to visit at least once during your lifetime. I finally did in September 2011 and although I knew a little about what to expect, I was completely blown away by the awesome scuba diving in this underwater paradise.

The cruise was a week in duration and the diving took place around the Meemu and Felidhoo atolls. The dive sites were fantastic and we were treated to a myriad of thrilling marine encounters too numerous to list here!

The Maldives is well-known for its underwater channels known as kandus where the currents bring in plenty of nutrients and attract a huge variety of fish life. We also spent many dives exploring the shallow reefs or thilas in the area which boast plenty of healthy, colourful corals and masses of tropical reef fish.

If you have never experienced a ride on a seaplane before then you will love the added bonus of a Maldivian air taxi from Male. From up in the sky the gorgeous emerald green islands surrounded by the calm blue waters look especially stunning and inviting. But what is not obvious from the air is the sheer numbers of fish living below the sea's surface.

We landed on the water just off Medhufushi Island, close to where the MY Sheena was moored. I stayed in a beach villa at the resort on the island for 2 nights prior to the liveaboard cruise and I can recommend a stay here to anyone; it is blissfully tranquil with luxurious accommodation and a superb choice of cuisine.

The Diving in the Maldives

Even though I was in the Maldives during 'low season' and the visibility wasn't always perfect, it didn't detract from the quality of the diving. If you like sharks and rays then this is the area for you. We saw large groups of grey reef sharks, whitetip reef sharks and silvertip sharks, as well as many different rays such as mantas, big black-spotted stingrays and schools of eagle rays. 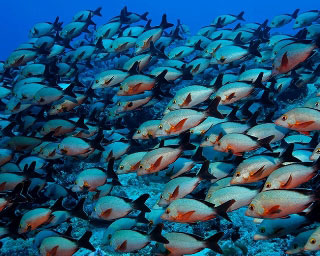 My favourite site has to be Happy Corner on the north tip of Meemu Atoll. After making a negative entry from the boat we descended down to the bottom at 30m. The current was very strong - my bubbles were almost horizontal, but you often get to see the biggest and most impressive fish where there are strong currents so I knew we were in for some action! I had my reef hook with me so once I'd secured myself to the rocks I settled down to watch the show and I wasn't disappointed; groups of sharks passed right by us, including silvertip sharks, grey reef sharks and a whitetip - awesome! We also encountered a huge school of jacks and 8 eagle rays on that dive.

More rays were to come at Alimathaa Island Dhekunu at Felidhoo Atoll. The dive began with a colourful display of soft and hard corals and an enormous school of snappers at just 5m depth. As we went deeper we were treated to the sight of manta rays gliding gracefully past, along with a big black-spotted ray, plus close-up encounters with whitetip reef sharks.

Beautiful, healthy hard and soft corals are a regular feature of this area of the Maldives. Another impressive feature is the huge shoals of fish everywhere. Kingdom of Fish off Meemu Atoll is a great example of such a site with pristine corals and hoards of fish - we saw schools of fusiliers in their millions! And if that wasn't enough we were accompanied by dolphins swimming off the bow of the boat on several occasions as we cruised between dive sites!

What is very noticeable at these sites is that there are hardly any other liveaboards around, unlike some of the other diving areas in the Maldives. The sites we went to are rarely visited so they are completely unspoilt and you don't have to share them with troops of other scuba divers.

Diving From the Boat

Sheena uses a diving dhoni, where all the tanks are housed and refilled so plenty of space along with peace and quiet is assured on the main boat. Briefings take place wherever is most convenient at the time, either inside the saloon or in the seating areas at the front or the back of the boat. The dhoni is spacious and the attentive staff are always on hand to make getting in and out of the water really easy.

Safety is paramount onboard MY Sheena and it is compulsory for each diver to wear a computer, have a surface marker buoy and an alternate air source. There can be strong current underwater and you may get separated from your guide. For the night dives, each diver must carry a torch along with 1 strobe light per buddy team. All the equipment needed can be rented on the boat. The boat operator also showed great respect for the marine environment and asked all the guests to comply with this which was good to hear.

The liveaboard boat is not particularly long but it is wide and the space is sufficient. With a capacity of just 14 guests maximum you can easily find some space for yourself. The large sun deck has plenty of shade too and this is a nice area to enjoy the sea view or watch the stars at night.

The air-conditioned lounge and bar is located on the main deck and boasts a large flat-screen TV, DVD and music centre. There are plenty of movies to choose from if you just want to chill-out after dinner.

There is a seated area outside the saloon and also an extra seating area with tables on the back of the upper deck. 5 cabins are situated on the lower deck and 2 on the upper deck. The boat was refurbished in 2009 and is very comfortable as well as practical.

The cabins are reasonably sized and include some storage area, and the bathrooms are small but adequate. 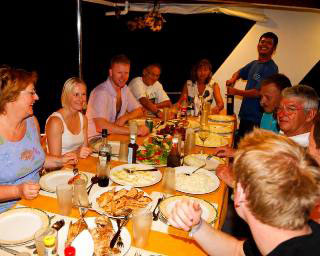 3 buffet-style meals a day are provided as well as a light breakfast before the first early morning dive. You can eat either outdoors or in the air-conditioned saloon.

A wide variety of international dishes is served including sushi and Italian, along with curries cooked local-style. There are always plenty of salads and vegetables to choose from with rice and potatoes. Meat included steak and chicken, and fresh fish was often served, all with plenty of fresh bread on the side. The desserts range from fresh fruit with yoghurt to fruit tarts and custard and there was also plenty of imported cheese to enjoy.

One of the week's highlights is a BBQ party held on one of Maldives' many islands. The guests all agreed that the food onboard was delicious - don't expect to lose any weight on this cruise!

We went ashore twice during the trip. On the first island we visited a small community to learn a little about their way of life. It was intriguing to watch the fully covered Muslim women play beach volleyball - and with considerable skill too! Children played happily in the sand while the local men looked on from home-made steel and netted beach chairs.

One young island lad offered us fresh tender coconut - delicious! On another island the boat crew sculpted a manta ray from the sand with a 4m wingspan; this later became our table to eat from. That evening we celebrated the 51st birthday of one of the guests, accompanied by singing from the crew - something you don't get to experience every day.

I would definitely go on another diving cruise with Sheena given the chance for many reasons, not least the general friendliness and cheerfulness of her entire staff. The tour leader Hassan Naif is very experienced but still enthusiastic about what he does. He knows how to make the most of any diving condition so we never missed out on exciting marine life encounters. Having said that, the dives in the Maldives can be challenging so you should be an advanced diver with at least 60 or so dives under your belt before you take a trip on this liveaboard boat.

The food is fantastic and appears as if by magic out of the small galley, prepared and served by staff that never tire of asking if you'd like anything else.

The boat is not huge but even with a full capacity of 14 divers onboard there is never a shortage of space on the vessel and you can always find a spot to yourself if needed.

So if you fancy plenty of outstanding marine life encounters within a fun and social environment, then cruising on the MY Sheena liveaboard in the Southern Atolls of the Maldives is just what the doctor ordered. I whole-heartedly recommend it and enjoyed it so much I hope to be back again myself one day. My favourite memories are of the rainbow-coloured healthy corals and the dives spent in the company of sharks, dolphins and rays.

... Thanks for the arrangement of the liveaboard! We had a great time. Everything was arranged perfect, from pick up until return. We have some experience with liveaboards, so I can say that everything was perfect organized. The website itself very helpful. All mails were answered very fast. The answers were very helpful. For sure I would recommend Dive The World ... -- Joerg Koepke, Germany.  [More customer reviews]